On Facebook, Norbert Hofer described himself as “infinitely sad” and congratulated Alexander Van der Bellen, former head of the Greens, on his victory.

Although the president’s role is ceremonial in Austria, the poll had been seen as a sign of how well populist candidates might do elsewhere in Europe.

Alexander Van der Bellen called the result a vote for a “pro-European” Austria based on “freedom, equality and solidarity”.

“Finally, you know, I will try to be an open-minded, a liberal-minded and first of all a pro-European federal president of the Republic of Austria.”

December 4 vote was a re-run of May’s election, which Alexander Van der Bellen narrowly won but was marred by postal vote irregularities. 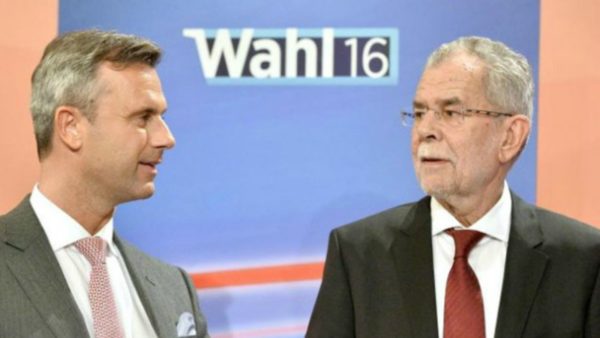 The Green Party’s said there had been significant changes – Brexit, the US election – since then, along with an increase in political interest – “an enormously broad electoral movement”.

EU leaders have been welcoming the result, which comes amid fears of populism undermining established parties.

Germany, France and the Netherlands all face elections next year in which anti-mainstream and anti-immigration parties are gaining ground.

A referendum under way in Italy is being closely followed for further signs of anti-establishment populism, with polls suggesting a setback for centre-left PM Matteo Renzi.

But the Austrian results surprised many.

Opinion polls in the run-up to December 4 vote suggested the result was too close to call.

The election campaign ahead of December 4 vote was bitter, with both candidates trading insults and election posters being defaced.

Norbert Hofer, the candidate for the anti-immigration Freedom Party, conceded within minutes of the first projections in this rerun.

He thanked supporters and described himself as “infinitely sad that it hasn’t worked out”.

Norbert Hofer called on all Austrians to work together, “regardless of how we cast our ballots”.

He had campaigned on an anti-immigration platform amid disquiet in Austria at an influx of refugees. Establishment parties feared a victory for him could give a boost to the Freedom Party in the next parliamentary election.

Norbert Hofer had also suggested Austria could follow the UK’s Brexit with a referendum of its own but later appeared to backtrack, suggesting instead changing the bloc into a purely economic association.

Marine Le Pen, the leader of France’s anti-immigration Front National, congratulated the Freedom Party on its campaign and looked forward to victory in Austria’s parliamentary poll.

Full official results are not expected until December 5 once postal ballots have been counted. Nearly 6.5 million Austrians were eligible to vote.