President-elect Donald Trump has said Somali refugee Abdul Razak Ali Artan, who went on a rampage at Ohio State University campus on November 28 “should not have been in our country”.

The 18-year-old’s mother says he acted normally on the day of the rampage at Ohio State University in Columbus.

FBI special agent in charge Angela Byers said separately that hemay have been inspired by al Qaeda cleric Anwar al-Awlaki, who was killed by a 2011 US drone strike in Yemen.

Abdul Razak Ali Artan was a refugee who moved with his family in 2014 to the US from Pakistan, where he had been living since 2007. 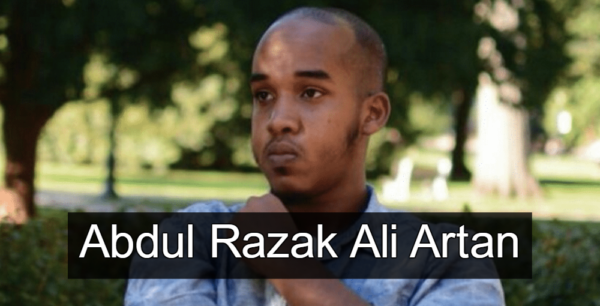 According to US officials, no negative information was found during background checks on Abdul Razak Ali Artan when he was allowed into the US and when he became a legal permanent resident in 2015.

Police say Artan drove his car at a group of people on the campus as students were returning from the Thanksgiving weekend.

After his vehicle jumped the kerb, the student then began attacking them with a “butcher’s knife” before being shot dead by a campus police officer.

Donald Trump has vowed as president to institute an “extreme vetting” program to limit immigration to the US from countries that are believed to be at a heightened risk of terrorism.

He had previously called for a “total and complete shutdown” on Muslim immigration to the US.

Hassan Omar, president of the Somali Community Association in Columbus, Ohio, spoke to Abdul Razak Ali Artan’s mother, who said he had driven his siblings to school as usual on the day of the attack.

“He woke up and he went to school,” Hassan Omar said, relaying the conversation that he had with Artan’s mother on November 28.

She told him that she did not know anything was wrong until police arrived at her house.

He said that “we will not let you sleep unless you give peace to the Muslims. You will not celebrate or enjoy any holiday”.

Artan’s post also complained about treatment of Muslims around the world.

He warned that some Muslims were in sleeper cells, “waiting for a signal. I am warning you Oh America!”

However, a friend said the attacker “actually loved America”.

Ameer Kadar, who last saw Abdul Razak Ali Artan two weeks ago, told NBC News: “He loved the fact of the opportunity he had here to go to school.

“He loved the fact that he was able to get a college degree.”

Abdul Razak Ali Artan grew up in Somalia, but moved to Pakistan in 2007.