A Tennessee school bus driver was arrested and faces charges including vehicular homicide after deadly crash that killed at least six children, Chattanooga police said in a news conference.

The school bus, carrying children aged five to 10, crashed at about 16:00 local time on November 21.

Images from the scene showed the bus wrapped around a tree, with its metal roof split in two. 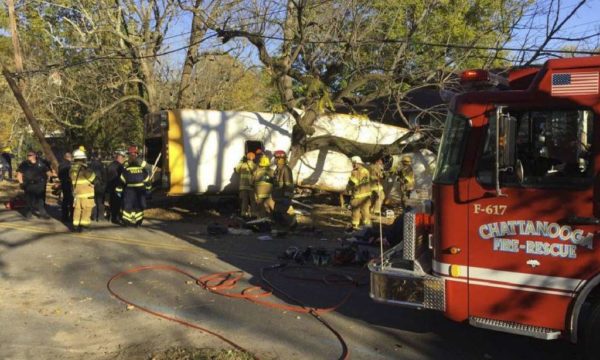 “Speed is being investigated very very strongly as a factor in this crash,” Fred Fletcher said.

He said it was a complicated crime scene, but conditions “appeared to be clear and dry”.

Investigators believe the bus may have hit a utility pole before colliding with the tree, the police chief added.

Johnthony Walker, who survived the crash, was being questioned and was co-operating with investigators, police said.

A spokeswoman for the district attorney said five children were found dead on board the bus after the crash, and another child had died in hospital.

A reporter for the local news channel tweeted that queues to donate were “out the door” and the office was taking appointments for the following morning.

Chattanooga Mayor Andy Berke asked concerned parents to go to the elementary school for information, and not the crash site.