Donald Trump will meet Mitt Romney as he continues to build his transitional team.

Mitt Romney was one of Donald Trump’s severest critics during the election campaign.

Media have speculated the post of secretary of state could be discussed.

During the election campaign, Mitt Romney called Donald Trump a “fraud” and “phony”, while Trump said Romney’s unsuccessful campaign against Barack Obama in 2012 was “the worst ever”.

The nominee for attorney general, Jeff Sessions, was rejected from becoming a federal judge in 1986 because of alleged racist remarks. 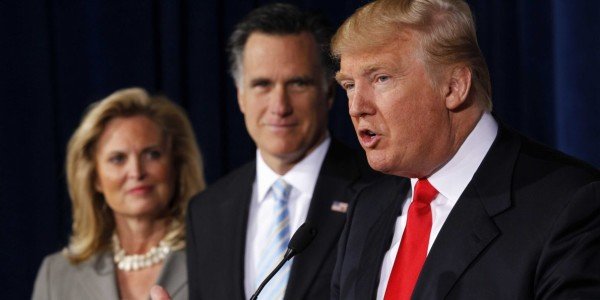 Also on November 18, Donald Trump settled three lawsuits for fraud brought against him over his Trump University.

He tweeted on November 19 that he had settled “for a small fraction of the potential award because as President I have to focus on our country”.

Donald Trump will be at his golf course in Bedminster, New Jersey, all weekend to conduct more meetings with potential appointees.

The president-elect tweeted: “Will be working all weekend in choosing the great men and women who will be helping to MAKE AMERICA GREAT AGAIN!”

Asked about the Romney meeting, Sean Spicer, a spokesman for the presidential transition, told reporters: “The president-elect wants the best and brightest people to put this country forward: people who supported him, people who didn’t support him.”

“The conversation with Mitt Romney is just that: an opportunity to hear his ideas and his thoughts,” he said.

Mitt Romney’s thoughts back in March were decidedly hostile.

The Republican said Donald Trump had neither “the temperament nor the judgement to be president”, accusing him of bullying, misogyny and dishonesty.

“Prospects for a safe and prosperous future are greatly diminished” if Donald Trump became the nominee, he said.

“His promises are as worthless as a degree from Trump University.”

Donald Trump responded by mocking Mitt Romney, calling him a “failed candidate” and a “choke artist”.

However, media suggest the role of secretary of state could be up for grabs, despite former New York mayor Rudy Giuliani being the early frontrunner.

Mitt Romney would certainly be another link to the Republican establishment, following the appointment of party insider Reince Priebus as chief of staff.

The 2012 Republican candidate in the past has taken a far more critical line on Russia than that suggested by Donald Trump.

Another of those meeting Donald Trump on November 19 will be James Mattis, a retired Marine Corps general being considered for defense secretary.

Gen. James Mattis oversaw military operations in the Middle East from 2010 to 2013 but disagreed with President Barack Obama’s desire for a greater presence in the Gulf.

He is not the only candidate though – Senator Tom Cotton from Arkansas met Donald Trump on November 18, the New York Times reported.

The other key appointments so far are Mike Pompeo as CIA director and Stephen Bannon as chief strategist.

In settling the Trump University class-action lawsuits, Donald Trump “was willing to sacrifice his personal interests, put this behind him, and move forward”, his lawyer said.

Donald Trump had been sued by former students who paid $35,000 for real estate “secrets” from his “hand-picked” instructors.

The lawsuits alleged the school had misled students and failed to deliver on its promises.

In his tweets on November 19, Donald Trump said the only thing bad about his election victory was that he would not be able to win the Trump University case in court.