Indians have queued up outside banks across the country to exchange 500 and 1,000 rupee notes after they were withdrawn as part of anti-corruption measures.

People will be able to exchange their old notes, which stopped being legal tender at midnight on November 8, for new ones at banks until December 30.

The surprise move is part of a government crackdown on corruption and illegal cash holdings.

Banks were shut on November 9 to allow them enough time to stock new notes.

There are also limits on cash withdrawals from ATMs. 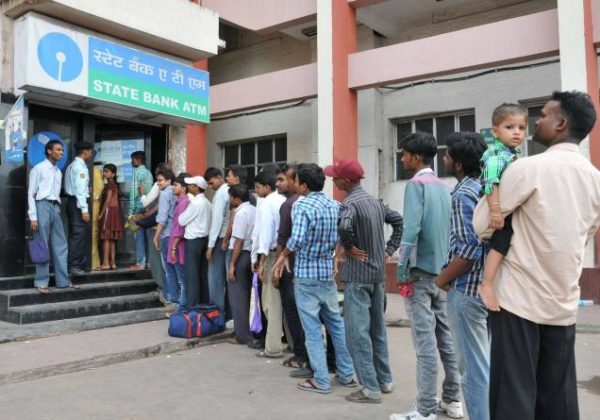 There were chaotic scenes outside banks in Mumbai and Delhi.

Some banks extended working hours to deal with the rush, and have hired extra staff on a temporary basis.

Meanwhile, Indian social media has been talking of little else.

The top trend on Twitter India has been #CashCleanUp with tweets ranging from the frustrated to the humorous, as many people came to terms with the fact that much of their day would be spent in queues.

New 2,000 (about $30) and 500 rupee denomination notes with new security features are being given to people to replace those removed from circulation.

A new 1,000 rupee note “with a new dimension and design” will also be introduced in due course, a senior government official said on November 10.

The government’s move is designed to lock out money that is unaccounted for – known as “black money” – which may have been acquired corruptly, or is being withheld from the tax authorities.

Finance Secretary Shaktikant Das warned people with large amounts of hidden cash that banks would closely monitor the exchange of old notes for new ones.

According to the government, the move will flush out tax evaders and that all old notes deposited in banks will be subjected to tax laws.