The UK’s FTSE 100 index fell 2% at the start of trading before paring back some losses to trade 0.7% lower at midday. 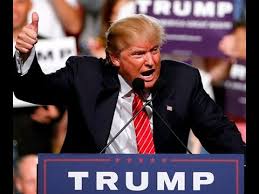 Other major European stock markets also fell, with money flowing into safe haven stocks, gold and currencies including the yen.

Traders had expected Hillary Clinton to beat Donald Trump to become the next US president.

France’s Cac index and Germany’s Dax are each down about 1.5% after heavier falls at the start of trading.

Some analysts have likened the shock of a Trump victory to the Brexit result earlier this year.

However, neither markets nor currencies have swung as wildly as they did after June’s EU referendum.

US stock futures fell dramatically overnight as Donald Trump’s lead became clear, although the Dow Jones index is now expected to lose 2% – about 400 points when it reopens – compared to earlier predictions of a 4% fall.

Asian markets were described as a “sea of red” at one point, before seeing their losses narrow towards the end of Wednesday trading.