Republican nominee Donald Trump was rushed off the stage by Secret Service during a rally in Reno, Nevada, when a man appeared to rush the stage.

Donald Trump noticed a protestor in the crowd and told event security to remove him.

Security personnel ran to the stage and grabbed him by the shoulders and rushed him behind the curtain.

Images emerged on social media of armed guards encircling someone on the ground.

Security led a bald man out of the convention hall as the crowd cheered and also booed the protestor. Moments later, a rally speaker took to the stage to tell the unsettled crowd that “nobody is going to stop this movement”. 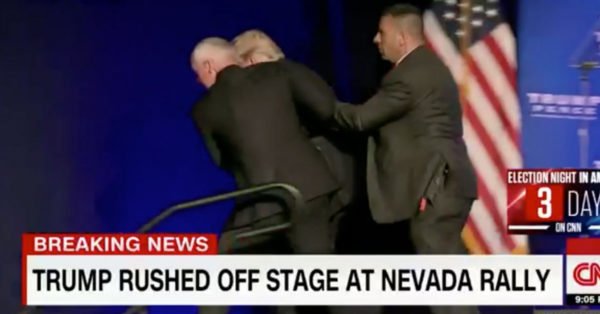 Donald Trump returned to the stage moments later to continue his speech.

The incident took place about 35 minutes into his speech and he spoke for another 10 minutes after returning to the stage.

The Republican candidate, who didn’t appear unsettled, briefly addressed the incident before jumping back into his speech: “Nobody said it was going to be easy for us, but we will never be stopped. Never ever be stopped.

“I want to thank the Secret Service. These guys are fantastic – they don’t get enough credit.”

A few minutes later, he paused to thank his supporters for helping to protect him as the man rushed the stage.

“I want to thank all these people,” Donald Trump said, pointing to the area where the man was stopped.

“I saw what you were doing – that’s a tough group of people right there. I saw that, that was pretty amazing. Nobody messes with our people,” he added.

No weapon was found on the man, according to ABC News. However, shouts from the crowd about a gun elevated the Secret Service’s response.

Donald Trump’s campaign released a brief statement that echoed his appreciation for Secret Service, but did not provide any additional information as to what had occurred.

The incident came during a slew of Donald Trump rallies three days before the election, as the Republican presidential nominee and his Democratic rival Hillary Clinton criss-cross the country before Election Day.