As part of an investigation into government corruption, South Korean prosecutors have issued arrest warrants for two former aides of President Park Geun-hye.

Her former senior secretary for policy Ahn Jong-beom, and private secretary Jung Ho-sung, are wanted in relation to charges of fraud and abuse of power.

President Park Geun-hye has so far refused to resign over the scandal. She apologized on TV on November 4.

In the TV address, she admitted that she made an error in allowing her friend Choi Soon-sil inappropriate access to government policy-making. 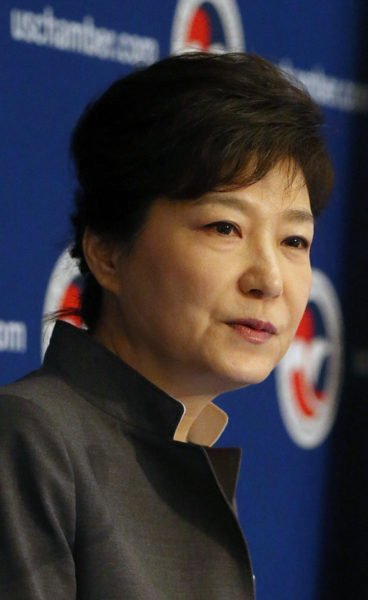 However, Park Geun-hye denied allowing cultish rituals to be performed in the presidential palace.

Choi Soon-sil, the daughter of a cult leader, is suspected of using her friendship with the president to solicit donations to a non-profit fund she controlled. She is in detention facing charges.

The corruption scandal, which threatens to engulf Park Geun-hye’s leadership, has left her with an approval rating of just 5%, the lowest ever for a sitting South Korean president.

Tens of thousands of South Koreans have been protesting in Seoul demanding her resignation.

The main opposition party, which said Park Geun-hye’s apology on November 4 lacked sincerity, also called on her to step back from state affairs.

Park Geun-hye became South Korea’s first female president when she was elected in a close-run contest in December 2012.

Choi Soon-sil is the daughter of Choi Tae-min, a shadowy quasi-religious leader who was closely linked to Park Geun-hye’s father, then-President Park Chung-hee.