The aspiring First Lady talked about her appreciation of America, her early days in Slovenia and her husband, Donald Trump.

If Donald Trump wins the presidency, Melania will be the first foreign-born first lady in 187 years.

She spoke in Berwyn, a Philadelphia suburb.

She was introduced by Karen Pence, wife of Donald Trump’s running mate, who said: “She is so strong, she is also very accomplished, working her way up through the fashion industry… her love for America is boundless, just like her husband.” 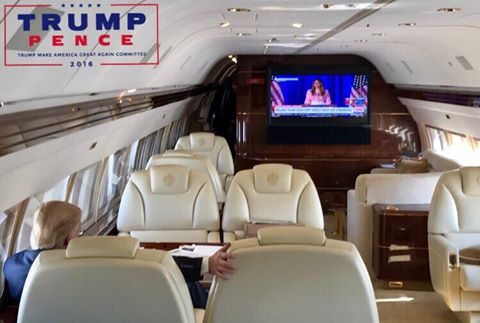 Wearing a powder-pink blouse and white skirt, Melania Trump glides on stage flashing a V-sign to the strains of Fifth Dimension’s Aquarius.

In her still-sharp Slovenian accent, Donald Trump’s wife started by remarking it’s been more than 500 days since her husband announced his candidacy: “This is not an ordinary campaign. It is a movement. A movement in which people feel included inspired and involved.

“He will make a fantastic president of these United States.”

Melania Trump remembered her life in Slovenia, saying: “I grew up in a small town in Slovenia near a beautiful river and forest. A small country that back then was under communist rule.

“Of course we always knew about the incredible place called America. America meant if you could dream it, you could become it.”

Melania Trump said about becoming an US citizen: “After a 10-year process which included many visas and a green card, in 2006 I studied for the test and became a US citizen. It is the greatest privilege in the world. I’m an immigrant and let me tell you no one values the freedom and opportunity more than me, both as an independent woman and someone that emigrated to America.”

She has been accused of working as a model in the US illegally in the past, but she has denied this.

“Donald knew he could not sit by anymore and watch what is happening in this country.

“Do we want a country that honors our constitution?” she continued.

As a future First Lady, she said: “It will be my honor and privilege to serve this country. I will be an advocate for women and for children.

Melania Trump talked about her experience discussing politics with her young son, and how she wants him to know how lucky he is to be born an American.

“I want my little boy to know that he is blessed to have been born in a country that values individual freedom.”

“Our culture has gotten too mean and too rough, especially for children and teenagers,” says Melania Trump about childhood bullying and online trolling.

“We have to find a better way to talk to each other to disagree with each other, to respect each other.”

She said that anti-bullying efforts will be one of her issues if she is to become first lady.

To some, Melania Trump’s remarks seemed at odds with her husband’s long history of using Twitter to insult people.

“We must win on November 8th. And we must come together as Americans. We must treat each other with respect and kindness even when we disagree. I will be there to support my husband’s efforts to support all Americans when he is president,” she said.

Melania Trump walked off stage to the sound of Living in America by James Brown.