YouTuber Calum McSwiggan has appeared in court in LA accused of lying to police over claims he was assaulted in West Hollywood.

The 26-year-old Briton pleaded not guilty to filing a false police report.

Calum McSwiggan claimed that he was attacked by three men near The Abbey gay club on June 27.

The YouTube star, who has more than 64,000 subscribers, posted a photo on Instagram as he lay in a hospital bed after the alleged attack. 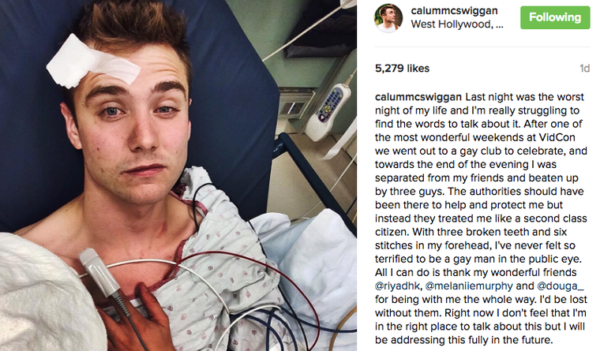 Calum McSwiggan told his followers that three of his teeth had been broken and he needed six stitches in his head.

The Los Angeles County Sheriff’s Department said officers investigated but were “unable to substantiate the assault”.

A spokesman said that Calum McSwiggan was arrested for vandalizing a car and was taken to hospital after he began injuring himself with a police station payphone.

Calum McSwiggan, who talks about LGBT issues on YouTube, appeared at the LA Airport Courthouse on September 26.

He entered not guilty pleas to charges of filing a false police report and vandalism.

Calum McSwiggan was ordered to return to the court for a pre-trial hearing on November 7 and refused to comment as he left the building.

After he was charged in June, Calum McSwiggan wrote on Facebook that he’d caused the injury that required the stitches to his head but insisted he was attacked by three men.

“Just because there were no visible marks on my face does not mean I was not attacked,” he wrote.

“Being accused of being a liar and being called a disgrace to the LGBT+ community, a community I’ve dedicated my life to, is more painful than any hate crime could ever be.”

Before the attack, Calum McSwiggan shared photos of himself, fellow YouTuber Riyadh Khalaf, Melanie Murphy and Doug Armstrong online getting ready to go out.

Calum McSwiggan traveled to California in June for online video conference VidCon, an annual event celebrating video bloggers from across the world.