At least 30 people have been killed and other 94 injured in a bomb attack at an outdoor wedding party in the south Turkish city of Gaziantep, the authorities say.

Turkey’s President Recep Tayyip Erdogan said ISIS was likely to have carried it out amid reports of a suicide bomber targeting the party.

The bomb attack, in an area popular with university students, could be heard across the city. 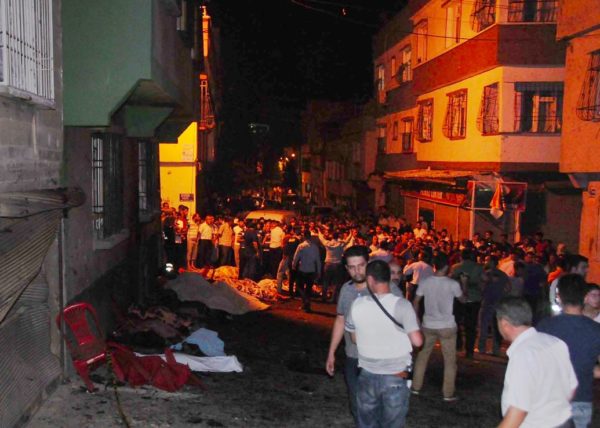 Gaziantep, near the Syrian border, is known to have several ISIS cells.

A suicide bomber believed to have links to ISIS killed two policemen in Gaziantep in May.

According to a report by AFP news agency, the bomb went off in a part of town with a large Kurdish community and there seem to have been many Kurds at the wedding.

In a written statement published by local media, President Erdogan argued there was “no difference” between ISIS, the Kurdish militants of the PKK, and followers of US-based cleric Fethullah Gulen, whom he blames for the coup attempt last month.

“Our country and our nation have again only one message to those who attack us – you will not succeed!” the president said.

On August 20, Turkey’s government said the country would take a more active role in efforts to end the war in Syria.

PM Binali Yildirim said a future political settlement for Syria must not include President Bashar al-Assad, ISIS or Turkey’s own Kurdish separatist rebels, the PKK.