Thousands of fans are attending a farewell procession for Muhammad Ali in his home city of Louisville, Kentucky.

Onlookers lining the roadside waved, took photos and chanted “Ali, Ali” as a cortege led by the hearse carrying his coffin drove through the downtown area.

The boxing legend and rights activist died on June 3 at the age of 74.

The cortege is taking Muhammad Ali’s body past key sites in his life, ahead of an interfaith memorial service.

Will Smith and ex-boxer Lennox Lewis will be among the pallbearers, while former President Bill Clinton will deliver one of the eulogies.

Thousands of free tickets for the memorial service, taking place at a major sports centre, were snapped up within half an hour.

The motorcade procession began at about 10:35 local time, more than an hour behind schedule, and is taking the coffin past his childhood home, the Ali Center, the Center for African American Heritage and then down Muhammad Ali Boulevard.

Fans threw flowers at the hearse and rose petals were scattered along the route. 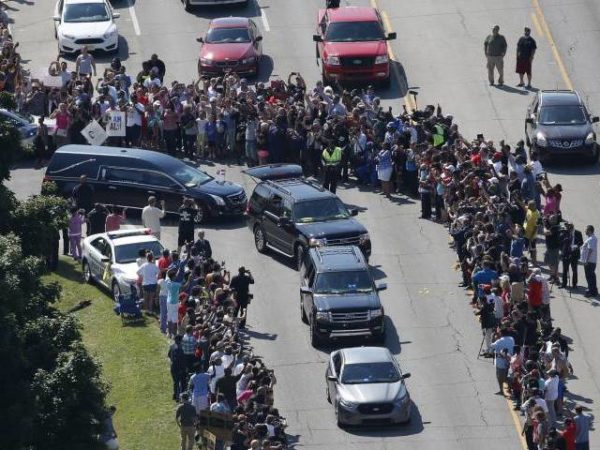 The procession, expected to take about 90 minutes, will end at the Cave Hill Cemetery where Muhammad Ali will be laid to rest in a private ceremony.

The funeral service at the KFC Yum! Center is due to begin at 14:00 local time.

Among those expected to attend the service is King Abdullah of Jordan.

Turkish President Recep Tayyip Erdogan attended June 9 prayer ceremony and had been due at the service, but reports say he has cut short his visit to the US.

The reasons for his departure are not clear, though there are reports of differences with the funeral’s organizers.

President Barack Obama will not be there, as he is to attend his eldest daughter Malia’s graduation.

In a video message, Barack Obama said: “This week we lost an icon. A person who for African Americans, I think, liberated their minds in recognizing that they could be proud of who they were.”