Lenovo has unveiled two smartphones – the phab2PRO and the moto Z.

The phab2PRO uses special cameras to scan its surroundings.

Its sensors allow it to make sense of objects and close-by spaces, allowing graphics to be intelligently added to real-world views.

The moto Z uses magnets to add optional hardware modules to the phone’s rear including a speaker and a projector.

Analysts said the innovations might prove a tough sell.

That would complicate Lenovo’s efforts to turn around sales of its own phones and those of the Motorola division it bought from Google for $2.8 billion in 2014.

The announcements were made at an event in San Francisco, where bendy smartphone and tablet prototypes were also revealed. 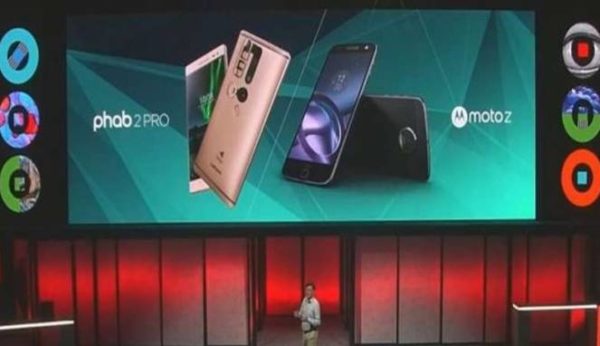 Lenovo is currently the world’s sixth bestselling smartphone-maker, according to IDC, after being overtaken by two other Chinese brands, Oppo and Vivo towards the start of the year.

The company reported in May that it had swung to a loss of $128 million in its last financial year.

It acknowledged at the time that it was having problems integrating Motorola.

The Phab2Pro is the first device to use Google’s Tango technology.

Google has developed a system that adds depth-sensing and motion-tracking cameras to the normal front and rear photo lenses.

Lenovo suggested this opened up several possibilities, including: video games in which characters could be superimposed over a view of a room; directions that could be drawn over a view of a store to show where goods are; the ability to see and move 3D models of furniture over a view of a home to help with interior decoration.

However, an on-stage demo proved problematic.

A game of virtual dominos – seen superimposed over a view of a real desk – saw the pieces repeatedly freeze part way through their intended run.

An effort to use the sensors to get the dimensions of a real-world table took several attempts to get the software to lock onto the object.

This raises questions about whether the tech is ready to go on sale as planned in September.

The Moto Z introduces the concept of Moto Mods – snap-on parts that connect to the back of the phone via 16 small metal pins.

Examples of modules it plans to offer alongside the phone include:

Lenovo said it was working with others to create new modules and also urged developers to create more following the phone’s release later this summer.

LG already has an alternative modular handset on sale – the G5 – and Google is working on Project Ara, a design that will allow several parts to be added at once.

They mark a break with a trend that has seen phone manufacturers integrate components as closely together as possible to maximize battery life and computing power.

Lenovo also showed off several concept devices at its presentation.

These included a smartphone and tablet with flexible screens.

This allowed the handset to be wrapped around a person’s wrist so that it did not have to be held, and a tablet to be folded in half, making it easier to use one-handed.

In addition, Lenovo briefly showed off a revised model of its smart shoes.

It said the Intel processor-equipped footwear could track its wearer’s movements and calorie burn.

Lenovo did not, however, say when any of these might go on sale.