German police clashed with hundreds of left-wing demonstrators trying to block the access of participants at a far-right party conference in Stuttgart.

At least 400 protesters have been arrested by riot police.

The right-wing populist Alternative fur Deutschland (AfD) party is expected to re-brand itself as openly anti-Islamic during the meeting. 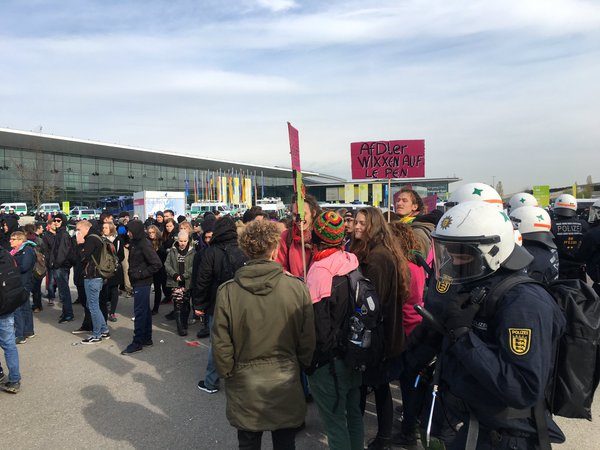 The AfD wants to ban the burqa and outlaw minarets in Germany.

Despite the protest, the AfD conference began as planned on April 30.

Nearly 2,000 members of the AfD are registered to attend the conference. The party achieved gains in all three states taking part in regional elections in March, claiming almost a quarter of the vote in the relatively poor eastern state of Saxony-Anhalt.

The AfD had campaigned against what it called Chancellor Angela Merkel’s “catastrophic” decision to accept a million migrants and refugees in 2015.

In today’s conference, the party must agree a manifesto ahead of next year’s general election.

Proposals include withdrawal from the euro and the reintroduction of conscription, but there are splits within the party, including between its less hardline wing and the leadership.

Before the conference, police encircled groups of demonstrators in a technique known as kettling. Some protesters were seen being dragged away, with others chanting “Shame on you” at officers.