The 28-year-old has become the first German since Steffi Graf in 1999 to win a Grand Slam title.

The 28-year-old is the first German to win a major singles title since Steffi Graf at the 1999 French Open.

Serena Williams, 34, was beaten for just the fifth time in 26 Grand Slam finals, and the American missed the chance to tie Steffi Graf’s open-era record of 22 titles.

Angelique Kerber, who saved a match point in her first-round win over Misaki Doi, will move up to No 2 in the world rankings.

She had won just one of six previous matches against Serena Williams and was making her Grand Slam final debut, but she was the better player over two hours and eight minutes on Rod Laver Arena. 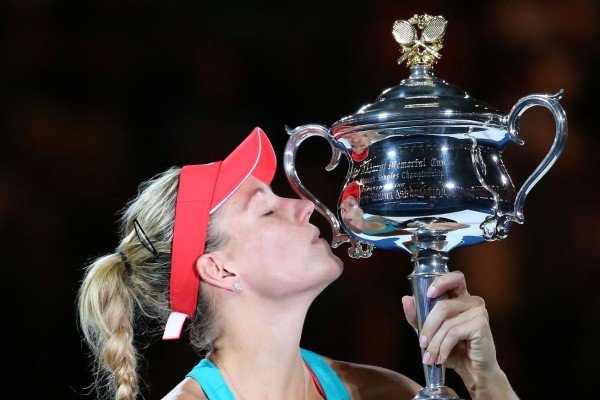 She led Serena Williams in the ace count until the latter stages, limiting her to just seven overall, while the American racked up 46 errors to just 13 by Kerber.

Serena Williams made 23 mistakes in the first set alone – sparking memories of her desperately nervous display in losing to Roberta Vinci at the US Open in September 2015 – and Angelique Kerber took full advantage to claim it after 39 minutes.

However, the defending champion cut her error count to just five in the second set and claimed it thanks to a single break in game four.

Angelique Kerber twice moved ahead in the decider and a stunning sixth game saw the German produce two fine drop shots and win a breathtaking 19-stroke rally to cling on to her serve and edge closer to victory.

Nerves took hold and she was broken while serving for the match, but she launched into the Williams serve once again and clinched the title when the world number one sent a volley long.

Angelique Kerber said afterwards that being able to say she was a Grand Slam champion “sounds crazy”.

“It’s my dream come. I worked for this my whole life,” said the German.

“It’s been such an up and down two weeks, I was match point down in the first round and had one foot in the plane to Germany.

“Now I have beaten Serena and won the championship. I have so many emotions, so many thoughts, but all of them good ones.”

Serena Williams was gracious in defeat, telling Angelique Kerber: “Angie, congratulations. You deserve this and I’m so happy for you. I really hope you enjoy this moment.”