Lucero Guadalupe Sanchez Lopez, 26, is a representative in Sinaloa, northern Mexico, where El Chapo (Shorty) Guzman has his powerbase.

Police officials said they wanted to know about an alleged visit Lucero Guadalupe Sanchez Lopez made to El Chapo Guzman prior to his jailbreak.

Lucero Guadalupe Sanchez Lopez denies the allegations and accuses the government of turning the arrest of El Chapo Guzman into a “media show”.

El Chapo Guzman was re-arrested on January 8 after six months on the run.

In a statement, the office said she would be questioned over an alleged visit she made to El Chapo Guzman in jail under a false identity.

Officials said that in 2014 Lucero Guadalupe Sanchez Lopez had shown guards false papers to see El Chapo Guzman at the Altiplano maximum-security prison, where he was being held prior to his escape in July 2015. 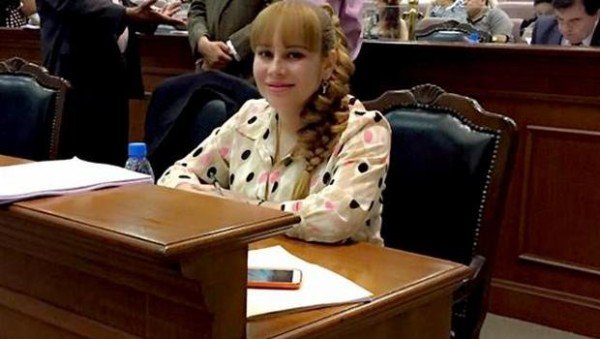 Lucero Guadalupe Sanchez Lopez has not been charged with any crime and has not been stripped of her post as congresswoman, the statement adds.

At the time, the leader of the Sinaloa drugs cartel was on the run following his escape from Altiplano prison through a one-mile-long tunnel.

He was captured in Los Mochis, a town in Sinaloa state, on January 8.

According to local media, Lucero Guadalupe Sanchez Lopez is the youngest person to have been elected as a state representative.

Local media have also alleged that Lucero Guadalupe Sanchez Lopez, whose ex-husband was shot dead in 2014, has had at least one child with El Chapo Guzman.

She has denied having a relationship with the drug lord.

While there is little official information about El Chapo Guzman’s family, those who have followed his criminal career believe he has 18 children with seven different women.

A prison official, Eduardo Guerrero, said that Emma Coronel, a former beauty queen who had twin girls with El Chapo Guzman, was prevented from visiting the drug lord on January 16 because she could not provide the right papers.

Eduardo Guerrero said Emma Coronel could not present proof that she had been married to Joaquin Guzman since 2007, as she insisted.

According to Eduardo Guerrero, El Chapo Guzman “will have to give us a divorce certificate [from his previous marriage] and then he has to demonstrate the common-law marriage” in order to be allowed to see Emma Coronel.

Eduardo Guerrero added that security had been ramped up at the Altiplano jail to prevent El Chapo Guzman from escaping again, including training dogs to detect his scent.

The prison official also said that any food given to El Chapo Guzman was first tasted by a dog, to prevent the inmate from being poisoned.