According to Russia’s ambassador to France, a Russian pilot who went missing after his warplane was shot down by Turkey was rescued by the Syrian army.

Alexander Orlov told Europe 1 radio the pilot had been taken to a Russian base. However, this report has not yet been confirmed by the authorities in Moscow.

The second pilot and a marine involved in their rescue operation were killed, Russia’s defense ministry says.

He said he backed the Turks’ assessment, but added “diplomacy and de-escalation are important to resolve this situation”.

Turkey said the warplane had strayed into its airspace but Russian President Vladimir Putin insisted the Su-24 had been hit by an air-to-air missile while flying over Syrian territory. 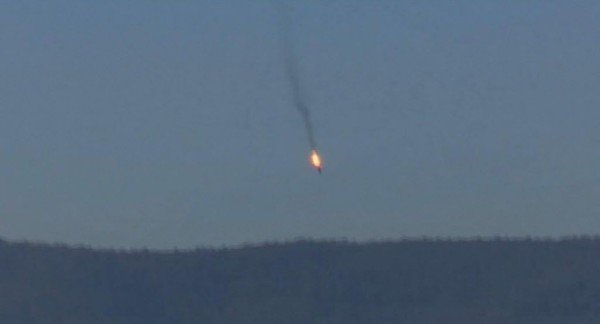 Vladimir Putin described the downing of the plane as a “stab in the back”.

Breaking off military contacts with Turkey, Russia’s defense ministry said a cruiser equipped with an air defense system would be deployed in the Mediterranean to destroy “any targets representing a potential danger” for Russian forces in Syria.

Russian bombers carrying out air strikes over Syria will now be escorted by fighters, the military said.

Russian defense official Lt-Gen Sergey Rudskoy said the two pilots were shot at from the ground as they parachuted from their burning plane – one of them was killed.

There have been various reports about the fate of the second airman.

“During the operation, one of the helicopters came under small-arms fire, was damaged and made an emergency landing on neutral territory,” he said.

“One naval infantryman serving under contract was killed.”

Sergey Rudskoy said the rest of the rescue team were safely evacuated from the area to Russia’s Humaymim air base near Latakia in Syria.

Syrian rebels say they blew up the helicopter shortly after it landed with an anti-tank missile, releasing footage of the attack.

Russians have been advised not to visit Turkey – a popular tourist destination – with Foreign Minister Sergey Lavrov saying the terror threat there was no less than in Egypt, where a bomb attack brought down a Russian passenger plane last month.

Turkish President Recep Tayyip Erdogan said his forces had been acting within their rules of engagement.

“Everyone must respect the right of Turkey to protect its borders,” he said.

The US, the EU and the UN have all appealed for calm.

President Barack Obama has assured his Turkish counterpart in a phone call of US support for his country’s right to defend its sovereignty.

Russia and Turkey have found themselves on opposing sides in Syria’s conflict, with Russia supporting its ally President Bashar al-Assad and Turkey calling for his ousting.