Her party, the National League for Democracy (NLD), has taken a decisive lead in results from November 8 election.

With about 40% of seats declared, the NLD has taken nearly 90% of the vote, leaving the military-backed USDP party with about 5% of seats.

However, a quarter of seats are reserved for the military.

Aung Suu Kyi sent letters to President Thein Sein, the commander of the armed forces and the parliamentary speaker.

She has not declared victory yet, and is treading carefully, say correspondents – calling for meetings next week with the three most senior figures in the current government to discuss an orderly transfer of power. 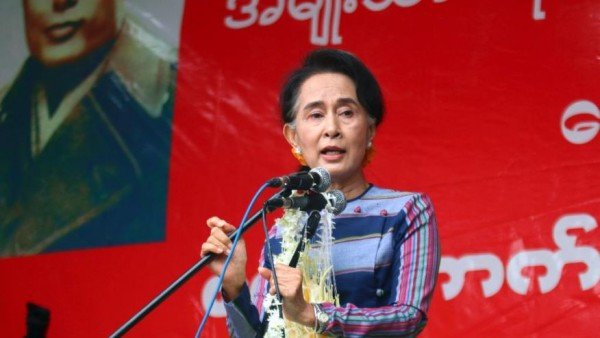 “A peaceful implementation of the people’s desire, which they expressed via the November 8 election, is very important for the country’s dignity and people’s peace of mind,” she wrote in letters made public by the NLD, according to the Irrawaddy news website.

“So I want to discuss with you in the spirit of national reconciliation. So please arrange a time for the meeting that would be convenient for you next week.”

In a response on his Facebook page, Information Minister Ye Htut reiterated that the government would respect the results of the poll, but said the requested meeting would only take place after the election commission had done its work, said AP news agency.

Aung Suu Kyi earlier retained her own seat and will return as lawmaker for her Kawhmu constituency in Rangoon – though she leads the NLD she is barred by the constitution from being president.

However, she has said “that won’t stop me from making all the decisions”.

The USDP, which has been in power in Myanmar since 2011, has taken 10 of the 491 seats being contested in both houses of parliament, compared to 163 by the NLD.

A quarter of the 664 parliamentary seats are set aside for the army. For the NLD to have the winning majority and be able to select the president, it will need at least two-thirds of the remaining seats – or 329.

About 30 million people were eligible to vote in last week’s election in Myanmar. Turnout was estimated at about 80%.

Hundreds of thousands of people – including the Muslim Rohingya minority, who are not recognized as citizens – were denied voting rights.