Rome’s iconic Trevi Fountain has been reopened to public after it underwent a 17-month €2.2 million renovation.

The world famous fountain, nearly 300 years old, is visited by millions of tourists every year.

The fountain’s poor structural condition was exposed in 2012 when bits of its elaborate cornice began falling off after an especially harsh winter.

It became famous in 1960 with the release of the film La Dolce Vita.

In the movie actress Anita Ekberg wades through the fountain’s pristine waters – her hopelessly infatuated male co-star in her wake – in what critics say is one of the enduring cinematic images of the 20th Century. 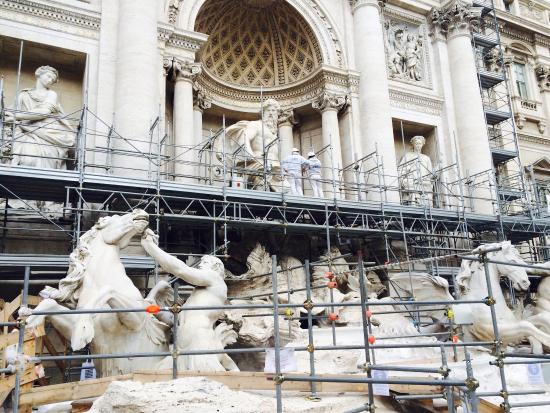 A team of 26 restorers have not only given the Trevi Fountain (Fontana di Trevi) a thorough cleaning, they have stopped it from crumbling away.

They have repaired cracks and steel supports with the aim of avoiding a repeat of the incident in 2012 when pieces of the fountain came crashing down.

Water once more tumbles from the base of the fountain’s sea-god scene and new lighting shows off its gleaming Baroque facade.

The repairs have been paid for by the Italian fashion house Fendi, founded as a leather goods business in Rome in the 1920s and now part of French luxury giant LVMH. It agreed a deal which allows it to hang a plaque near the monument for four years.

Fontana di Trevi was commissioned by Pope Clement XII in 1730 and it was last restored 23 years ago.

The fountain is the end point of one of the aqueducts that supplied ancient Rome with water. The Acqua Vergine runs for a total of 12 miles before flowing into the fountain.

According to legend, the water source was discovered in 19 BC by thirsty Roman soldiers directed to the site by a young virgin – which is why it is called Virgin Waters.

Tourists can drink from a special tap tucked away at one side.

The tradition of throwing coins into the Trevi Fountain was made famous by Frank Sinatra’s Three Coins in the Fountain in the 1954 romantic comedy of the same name.