The retired neurosurgeon takes a narrow lead in a New York Times/CBS News poll, ousting Donald Trump who has led the pack for nearly four months.

The news comes on the eve of the third TV debate for Republican contenders.

The next-ranked candidates are Marco Rubio (8%), Jeb Bush and Carly Fiorina (7% each) but they are a long way behind.

Conservative Ben Carson, who has expressed extreme views on a range of issues, has 26% of Republican primary voter support, according to the telephone poll of 575 voters.

The 64-year-old lead of 4% over Donald Trump is well within the 6% margin of error. 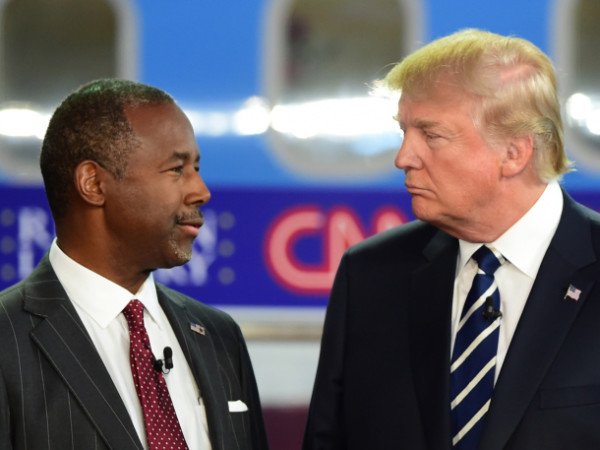 Florida Senator Marco Rubio has 8% support and the rest closely follow behind him.

Donald Trump has turned his fire to Ben Carson in recent days, attacking him as “low energy” and questioning his Seventh Day Adventist faith.

The two will meet on the stage at Boulder, Colorado, at the Republican debate on October 28.

Ben Carson was criticized this week for comparing abortion to slavery.

The retired doctor has said President Barack Obama’s healthcare reform was “the worst thing” since slavery and that the US government is acting like Nazi Germany.

He also asserted that being gay is a choice, Muslims aren’t qualified to seek the US presidency, the Holocaust could have been prevented if persecuted Europeans owned more guns and – just a few days ago – that the US government should cut off funding to universities that are found to exhibit “extreme political bias”.

Ben Carson’s comments on abortion have set off yet another cycle of outrage from the left – a reaction that he will likely wear as a badge of honor.