The show’s new host is best known as a stand-up comedian, but also made several appearances on The Daily Show with Jon Stewart as a correspondent.

Trevor Noah, 31, has had a mixed reception from critics after his first show as a host.

The South African comedian made a “smooth transition” into the role on Comedy Central’s satirical news show, according to Variety. 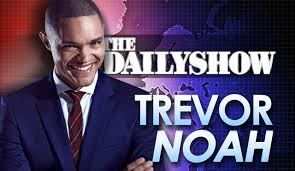 TV columnist Brian Lowry said he looked “more at ease and in command than he ever did as a correspondent”.

Jon Stewart stepped down after 16 years at the helm of the influential show and Trevor Noah’s appointment was announced in March.

“No memories of Stewart and his storied reign have been usurped or replaced,” wrote The Hollywood Reporter.

“Nor, however, have they been sullied.”

Trevor Noah’s opening monologue kicked off with a joke about growing up on the dusty streets of South Africa, where his only two dreams were hosting The Daily Show and having an indoor toilet.

“Now I have both. And I’m quite comfortable with one of them,” he said.

Paying tribute to Jon Stewart, Trevor Noah said: “He was often our voice, our refuge and in many ways our political dad,” before joking, “Now it feels like the family has a new stepdad. And he’s black. Which is not ideal.”

This week’s guests are Whitney Wolfe, the CEO of dating site Bumble and co-founder of Tinder, the governor of New Jersey, Chris Christie and musician Ryan Adams – who last week released an album of cover versions based on Taylor Swift’s 1989 album.