Pope Francis held a large open-air Mass in Philadelphia, ending his six-day visit to the US.

The pontiff appealed for unity and family love, as thousands of people gathered at Philadelphia’s Benjamin Franklin Parkway.

Earlier, the Pope prayed with a group of victims of child abuse, saying “God weeps” for their suffering. 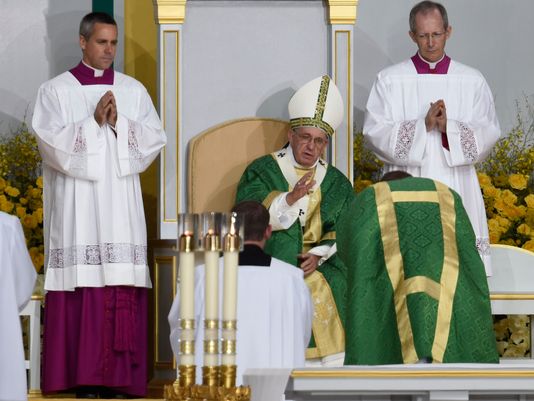 Clergy and bishops abusing children would be held accountable, he said. The Roman Catholic Church in the US has been embroiled in child abuse scandals.

US dioceses have made huge compensation payouts to victims.

However, many abuse survivors are angry at how the Vatican has dealt with allegations.

During Sunday’s homily in Spanish, Pope Francis, 78, called the crowd to be open to “miracles of love for the sake of all the families of the world”.

“The urgent challenge of protecting our home includes the effort to bring the entire human family together in the pursuit of a sustainable and integral development, for we know that things can change.”

Finishing Mass, Pope Francis said: “I ask you to pray for me. Don’t forget.”