Indian PM Narendra Modi has visited the headquarters of Facebook in California on September 27.

During a Q&A session, Narendra Modi has hailed the political power of social media saying in Hindi: “To leaders all over the world: you are not going to gain by running away from social media.”

Later on Sunday, Narendra Modi was welcomed by more than 20,000 people at a stadium in nearby San Jose. 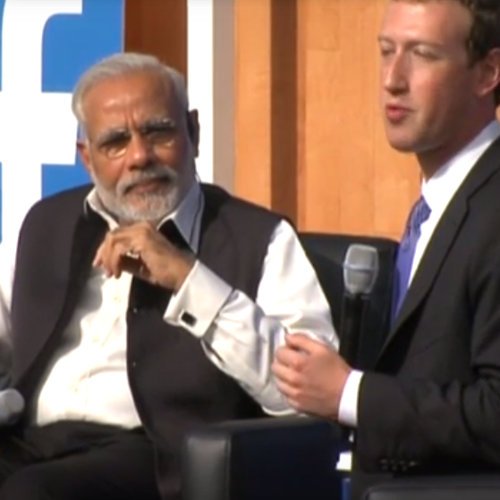 Speaking at Facebook’s campus in Menlo Park, Narendra Modi said: “The strength of social media today is that it can tell governments where they are wrong and can stop them from moving in the wrong direction.”

“We used to have elections every five years and now we can have them every five minutes,” he added.

Both Mark Zuckerberg and Narendra Modi shared emotional moments during the discussion.

After Mark Zuckerberg pointed out his parents in the audience, Narendra Modi welled with tears speaking about his own.

The prime minister recounted stories from his childhood in a poor family, selling tea at a railway station and doing hard chores to earn money.

“It is hard to imagine that a tea seller has actually become the leader of the world’s biggest democracy,” he said.

Mark Zuckerberg also told of a time when the company was going through what he called a “rough patch”. His late mentor, Apple boss Steve Jobs, advised him to travel to India.

“Seeing the people and how people connected, reinforced what we were doing and is something I’ve always remembered,” he said.

Narendra Modi said he wanted to connect all India’s villages to the internet – around a billion Indians currently lack internet access.

Facebook says its internet.org project, which offers free access to a bundle of mobile phone web apps, can help get the developing world online.

However, the project has drawn criticism in India, accused of favoring Facebook over local services. Mark Zuckerberg has promised to open the scheme to a wider range of apps.

US tech companies see India as a big commercial opportunity, but want the country to reduce red tape.

Narendra Modi wants to bring the success his compatriots have enjoyed in Silicon Valley – where around one in four tech companies is founded or run by Indians and Indian Americans – back to India.

On September 28, Narendra Modi will attend the UN General Assembly in New York and is expected to hold talks with President Barack Obama.