NASA scientists think they can now tie dark streaks seen on the surface of Mars to periodic flows of liquid water.

For a long time, scientists have thought these streaks come from a salty brine that’s solid in the winter but melts in the springtime, streaming downhill. But since the streaks are only 5 meters wide at most, the satellites couldn’t get a clear enough look to analyze their composition.

Data from a NASA’s Mars Reconnaissance Orbiter (MRO) shows the features, which appear on slopes, to be associated with salt deposits.

Crucially, such salts could alter the freezing and vaporization points of water in Mars’s sparse air, keeping it in a fluid state long enough to move.

The study is published in today’s Nature Geoscience.

There are implications for the existence of life on the planet today, because any liquid water raises the possibility that microbes could also be present. And for future astronauts on Mars, the identification of water supplies near the surface would make it easier for them to “live off the land”.

Researchers have long wondered whether liquid water might occasionally flow across the surface today. 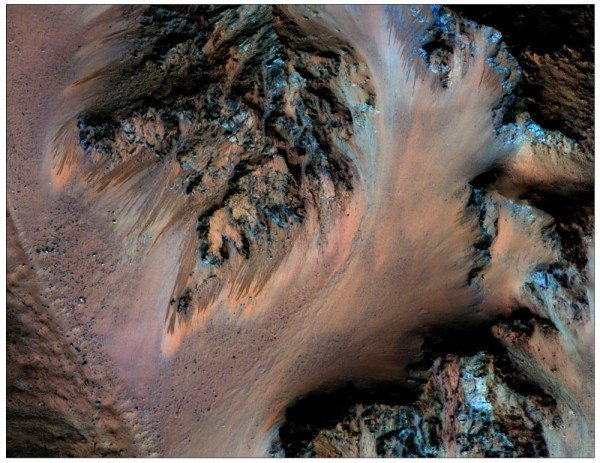 It is not a simple proposition, because the temperatures are usually well below zero Celsius and the atmospheric pressure is so low that any liquid H2O will rapidly boil.

The observation over the past 15 years of gullies and surface streaks that appear to change with the seasons has heightened the speculation.

Dr. Lujendra Ojha has now presented new data from the MRO that seems to solve the conundrum.

MRO has an instrument called Crism that can determine the chemistry of surface materials.

It has looked at four locations where dark streaks are seen to come and go during Martian summer months.

Crism finds these “recurring slope lineae” (RSL) to be covered with salts.

They are salts – magnesium perchlorate, chlorate and chloride – that can drop the freezing point of water by 80 degrees and its vaporization rate by a factor of 10.

Quite where the water is coming from to make the streaks is still unclear, however. The locations studied by MRO are equatorial, and any stored water in this region of Mars, perhaps in the form of ice, is thought to exist only at great depth.

One possibility is that the salts actually pull the water out of the atmosphere. The Curiosity rover has found some strong pointers to this mechanism. But again, it is not known whether there is a sufficient supply in the air to facilitate a decent flow.

Another theory is that local aquifers are breaking up to the surface, but this does not really fit with streaks that appear from the tops of peaks.

It is conceivable that streaks are being formed from different sources in different parts of Mars.

The findings strongly suggest that the brine hypothesis is correct—in which case, it would mean there’s liquid water on Mars, at least seasonally. That’s great news for scientists who still think life could be lurking on Mars.

The potential for life on Mars is still a long shot, but worth looking into, the authors write.

“The detection described here warrants further astrobiological characterization and exploration of these unique regions on Mars.”