Skywatchers around the world are gearing up to spot a rare phenomenon, as a lunar eclipse coincides with a supermoon.

A supermoon occurs when the Moon is in the closest part of its orbit to Earth, meaning it appears larger in the sky.

The total lunar eclipse – expected to make the Moon appear red in color – will be visible in North America, South America, West Africa and Western Europe.

NASA claims a supermoon last coincided with a lunar eclipse in 1982 and is not expected to again until 2033.

However, the definition of a supermoon is debated among astronomers.

Skywatchers in the western half of North America, the rest of Europe and Africa, the Middle East and South Asia will see a partial eclipse. 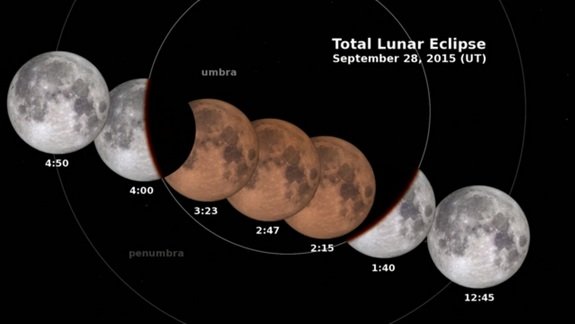 The eclipse will begin at 00:11 GMT, when the Moon enters the lightest part of the Earth’s shadow, known as the penumbra, and adopts a yellowish color. At 02:11 GMT the Moon completely enters the umbra – the inner dark corpus of our planet’s shadow.

The point of greatest eclipse occurs at 02:47 GMT, when the Moon is closest to the centre of the umbra. The show will be over by 05:22 GMT on September 28.