The United Nations warns that a daily flow of about 8,000 Syrian and Iraqi refugees to Europe is likely to continue.

More than 5,000 refugees are arriving daily in Greece.

That flow could continue during the winter if the weather remains good and the borders open, the International Organisation for Migration (IOM) said.

About half a million migrants – mostly from Syria and other conflict zones in the Middle East and Africa – have arrived in Europe this year. 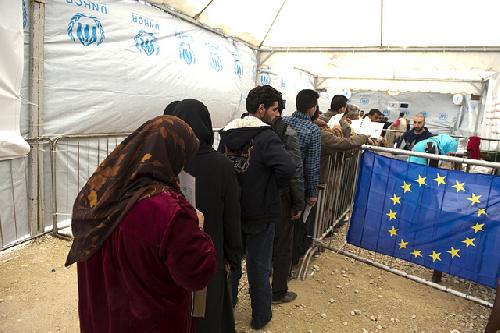 The refugee influx has caused tensions between EU neighbors in Central Europe, which continued on September 25 despite a visit to Austria by Hungary’s PM Viktor Orban.

Viktor Orban and Austrian Chancellor Werner Faymann did not appear together in public after their talks.

Werner Faymann had earlier likened Hungary’s tough handling of migrants to the policies of Nazi Germany – a comparison angrily dismissed by Hungary.

What happens on the Croatia-Hungary border will be “decisive in the next few days” for the refugee crisis, he said. Hungary has nearly completed the fence on that border.

Croatia – the EU’s newest member state – has struggled with an influx of migrants from Serbia, since they were blocked at the Hungarian border. Croatia-Serbia tensions escalated into a war of words.

On September 25, Croatia’s PM Zoran Milanovic said he was working to lift the country’s border restrictions “today or tomorrow”.

Vehicles have been blocked and Serbia – a candidate to join the EU – angrily compared the restrictions with “those of the World War Two fascist regime”.

Scars remain from the Serb-Croat fighting of the 1990s, when Yugoslavia disintegrated in inter-ethnic conflict.

Deep divisions surfaced in the EU this week when ministers agreed to relocate about 120,000 refugees across Europe.

The refugees – from Syria, Iraq and Eritrea – will be transferred from Greece and Italy, to ease the pressure on overcrowded reception centers there.

However, there is still a dispute about the distribution plan. Hungary, Romania, the Czech Republic and Slovakia voted against it. They resent the imposition of quotas, arguing that they are ill-equipped to integrate non-EU rrefugees.

Many of the refugees are determined to reach Germany, whose Chancellor Angela Merkel has urged EU partners to take in more refugees. Germany expects to have at least 800,000 asylum seekers in 2015.

Germany’s federal government has pledged €4 billion ($4.5 billion) to its regional states, double the current levels of funding, to help them cope with a record refugee influx.