Pope Francis has made a historic address to US Congress, where he received a warm welcome from more than 500 lawmakers, justices and officials.

He has become the first pope to address a joint meeting of the US Congress.

The Pope was greeted at the Capitol by Speaker of the House John Boehner, who is Catholic, and then entered the chamber to thunderous applause.

The pontiff began his speech by warning of the dangers of “ideological extremism”.

He emphasized the importance of welcoming immigrants.

Pope Francis said the world is facing a refugee crisis of a magnitude not seen since World War Two, and noted that thousands travel north into the US for a better life every year. 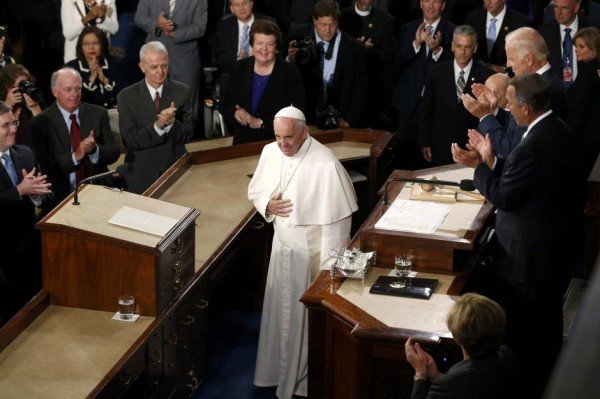 “We must not be taken aback by their numbers, but rather view them as persons, seeing their faces and listening to their stories, trying to respond as best we can to their situation,” he said.

Pope Francis also related the work of lawmakers to that of Moses, saying they had a responsibility to promote unity through “just legislation”.

The pontiff said the world must be attentive to “fundamentalism, whether religious or of any other kind” but also touched on economic inequality saying “even in the developed world, the effects of unjust structure and actions are all too apparent”.

During his speech, Pope Francis renewed calls for “the global abolition of the death penalty” saying criminals should be rehabilitated.

He also reaffirmed his “esteem and appreciation” to the indigenous people of the Americas who faced “turbulent and violent” contacts with colonizing powers.

Noting that most Congress members were the descendents of migrants, Pope Francis urged them to “treat others with the same passion and compassion with which we want to be treated”.

Thousands of people have gathered on the West Lawn of the Capitol hoping to see the Pope.

Sitting behind the Pope was Vice President Joe Biden and John Boehner, the first and second in line to the presidency, who are both Roman Catholics.

John Boehner, a Republican, is a former altar boy who invited the Pope to speak after failing to persuade his two predecessors to do likewise. He has ruled out fears that Pope Francis – who has a reputation for being politically engaged – will stir up controversy.

“The Pope transcends all of this,” John Boehner wrote in an online essay.

“He appeals to our better angels and brings us back to our daily obligations. The best thing we can all do is listen, open our hearts to his message and reflect on his example.”

Later on the day, Pope Francis is due to share a meal with homeless people.