On the first day of his visit to the US, Pope Francis has called for further action on climate change saying that it was “a critical moment of history”.

Speaking to a crowd of more than 11,000 people on the White House South Lawn, Pope Francis said the problem could “no longer be left to a future generation”.

President Barack Obama said Pope Francis reminded people “that we have a sacred obligation to protect our planet”.

The pontiff will later conduct the first canonization on US soil.

Following the speech, the two leaders met behind closed doors in the Oval Office.

Speaking in English – one of the few times the Argentine pontiff is expected to do so during the week’s many events – Pope Francis praised President Barack Obama for recent proposals aimed at tackling air pollution. 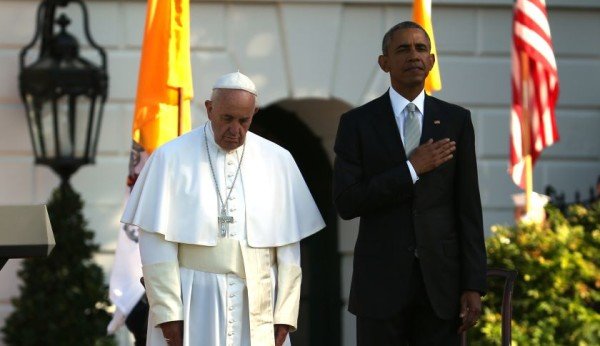 Time remains to make the changes required, Pope Francis said, in a speech that also called for protecting religious liberty and stamping out discrimination.

The environmental issue is a divisive one in US politics, with one Republican congressman boycotting Pope Francis’ speech to Congress on September 24 because of the pontiff’s stance.

All the leading Republican presidential candidates oppose action to tackle climate change because they say it will hurt the economy.

The morning began with the pontiff emerging from the Apostolic Nunciature – the Holy See’s equivalent of an embassy – around 09:00 local time.

Clad in his traditional white cassock, Pope Francis spent several minutes greeting well-wishers who had assembled behind temporary fencing in front of the diplomatic complex.

After shaking hands and giving hugs and kisses to the largely young crowd, the pope boarded a modest hatchback trailed by a convoy of large security vehicles and made the 15-minute drive through Washington on streets that had been cleared of traffic for the occasion.

At the White House large crowds gathered on the South Lawn to greet Pope Francis. Officials said over 11,000 tickets had been issued, but noted that the crowd was even larger.

A cadre of Obama administration officials and a military color guard flanked a stage set up outside the South Portico – among the most rare and respectful diplomatic ceremonies that the US government can offer visiting dignitaries.

Following a military color guard and the playing of the Holy See and US national anthems, President Barack Obama welcomed Pope Francis with brief remarks.

The canonization on September 23 will be part of a Spanish-language Mass to be held at the largest Roman Catholic church in North America, and will elevate to sainthood the Spanish missionary who brought Christianity to what is now the US west coast.

At the afternoon Mass, Junipero Serra, a Spanish Franciscan who founded a mission in California in the 18th Century, will become the first Hispanic saint in the US.

But the decision to canonize the missionary has been criticized by some Native Americans, who view him as someone who aggressively imposed Catholicism on their ancestors.

Pope Francis has in the past apologized for the treatment of indigenous people.