Egyptian-Canadian Mohammed Fahmy and Egyptian Baher Mohamed were among 100 prisoners whose release was ordered.

Egypt’s state media said a third person from the case was also pardoned. It is not clear if this is the Australian Peter Greste, who was deported in February.

They were sentenced to three years in prison last month after a retrial.

Prosecutors accused them of collaborating with the outlawed Muslim Brotherhood after the overthrow of President Mohamed Morsi by the military in 2013.

The journalists denied the allegation and said they were simply reporting the news. Legal experts said the charges were unfounded and politically motivated. 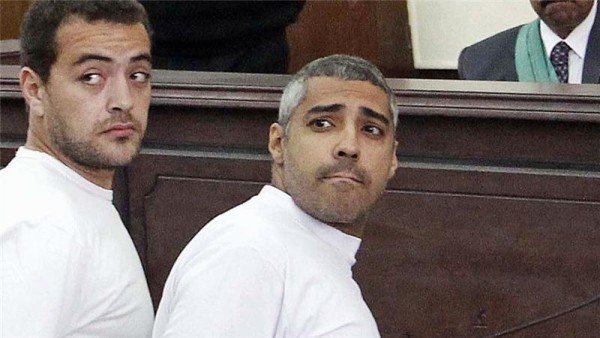 A statement from President Abdul Fatah al-Sisi’s office issued on September 23 said Mohammed Fahmy and Baher Mohamed were named on a decree pardoning 100 young people “who had received final court sentences, having been convicted on the grounds of violating the anti-protest law and assaulting police forces”.

“Other prisoners were pardoned due to their health conditions and on humanitarian grounds,” the statement added.

Also named were the prominent activists Yara Sallam and Sanaa Seif, who were jailed in 2014 for taking part in an “illegal protest”.

After the pardons were first reported, a tweet from Mohammed Fahmy’s account said: “Thank you to all the supporters sending us the news, we have heard and are very happy. AJ Staff is Free!”

Al Jazeera said in a report on its website that it “continues to demand all charges and sentences against its journalists are dropped”, noting that Peter Greste and six other employees had been convicted in absentia.

The pardons were issued by President Abdul Fatah al-Sisi ahead of the Islamic festival of Eid al-Adha and a day before he travels to New York to address the UN General Assembly.

The president had said he would be willing to pardon the Al Jazeera journalists once the judicial process had ended.

Mohammed Fahmy, who renounced his Egyptian citizenship to qualify for deportation in February, was expected to leave for Canada following his release.