J.Bryan Mann wanted to know what was behind an increase of injuries among University of Missouri football players. At the time, he was an assistant director of strength and conditioning at the university, and is now an assistant professor of physical therapy. He began studying the problem, running analyses to determine the root cause. But none of the models he tried seemed to explain the rash of injuries. “We ran everything we could possibly think of,” he told The Huffington Post, “We found nothing.”

Finally, Mann decided to see if there was a correlation between the increased injuries and the dates they occurred. The results stunned him. He noticed that football players were more likely to be injured during certain parts of the year. Training season saw a big spike in injuries, but this was more or less to be expected. What really caught Mann’s eye was the injury spike during exam weeks. 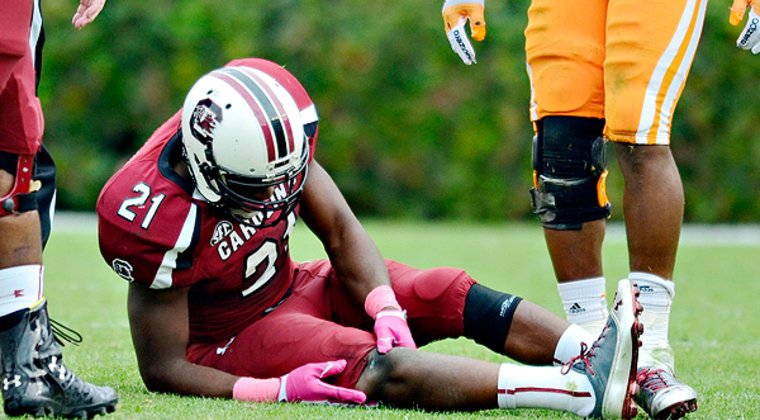 Looking to corroborate his research, Mann took his findings to Brick Johnson, a fellow professor at the school who specializes in health psychology. The two enlisted the help of other professors, and together they produced the paper called The effect of physical and academic stress on illness and injury in division 1 college football players.

The researchers found that players were three times as likely to suffer an injury during periods of high academic stress, such as midterm exams and finals.

“Stress is a syndrome, and all stress affects the body the same way, although not to the same intensity,” Mann writes. “So it doesn’t matter if the stress is coming from practice, from strength training, from conditioning, from academics, from relationships, from monetary [issues], from any of those means. It’s going to affect the body in the same way. And we’ve only got so much resistance that we can give before something starts to break.”

The effects of stress on illness have been studied for quite some time, but the relationship between the two is far from fully understood. Based on Mann’s and similar findings, many schools have begun trying to reduce the amount of academic stress their student-athletes face during the school year. The Pac-12 Conference, for example, advocates health and promotes wellness of their athletes. A report from the conference found that, although the majority of students were satisfied with conditions for student-athletes, many of them were working with schedules that prevented a full night’s sleep. “Sleep is the number one thing their athletic time commitments prevent them from doing, ultimately hindering their athletic and academic performance,” the Pac-12 report stated.

Mann hopes his study will inspire other universities to look into the issue. “We can’t account for when somebody’s significant other breaks up with them. We can’t account for financial problems that the athlete’s family has,” said Mann. “But you know what we can account for? Whenever there’s going to be a test.”

Mann recommends coaches relax training and practice schedules when they conflict with periods of high academic stress. “They cannot say, ‘Campus you are not having tests. That’s absolutely ridiculous,” he said. “But what they can say is, ‘Look, instead of two hours of practice maybe we go an hour and a half, an hour and forty five. Maybe we pick some drills that work more on the technical and tactical side rather than the physical side of sport preparation for the week. It’s just small changes like that.”