Greeks return to polls as voting has begun in the country’s snap general election.

The snap election, Greece’s fifth in six years, was called after Syriza lost its parliamentary majority in August.

The bailout involved austerity measures which Syriza had vowed to oppose.

Greece is mired in a deep financial crisis and whoever wins today’s election will have to oversee further tough economic reforms.

According to analysts, whichever party wins is unlikely to get enough seats to form a government alone.

That could mean a period of political instability just as deadlines loom for the implementation of a series of key financial reforms.

Former PM Alexis Tsipras said Greeks would elect “a fighting government” that will “move on with necessary reforms and break with the old regime”, as he cast his ballot on Sunday morning in the Athens district of Kypseli. 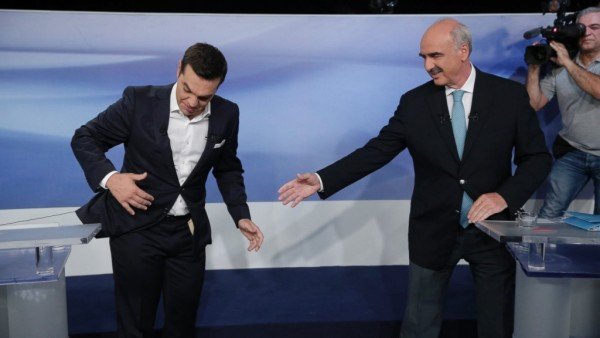 Alexis Tsipras signed the bailout deal shortly after a referendum in which more than 60% of voters rejected the austerity measures creditors wanted to impose.

In interviews leading up to the election, Alexis Tsipras Tsipras said he had put his country above his party. He said that had he not agreed to the three-year bailout, Greece would probably have had to leave the eurozone.

He told Antenna TV on September 18 he would “tug the rope” to try to win relief on Greece’s huge national debt from EU creditors.

His main rival, New Democracy leader Vangelis Meimarakis, has dismissed Alexis Tsipras’s term in office as “an experiment that cost [the country] dearly”.

“I fear that if Syriza is elected… the country will soon be led to elections again, and this would be disastrous,” he said.

Commentators say there is also a tight race for third place between the socialist Pasok party and the far-right Golden Dawn.

Analysts have said the migrant crisis on Greece’s doorstep may boost support for Golden Dawn, which is strongly opposed to immigration.