Home World Americas News Pope Francis Arrives in Havana on His First Trip to Cuba and...

Pope Francis has arrived in Havana, on his first visit to Cuba.

The pontiff will spend four days in Cuba before flying to the US.

The first pope to hail from Latin America, Pope Francis is credited with helping the recent thaw in diplomatic relations between the two countries.

Cuban President Raul Castro has thanked the Pope for his contribution. Cities on Pope Francis’ itinerary have been renovated in preparation for the visit.

On September 17, the Vatican said it hoped it would help bring to an end the 53-year-old US embargo and lead to more freedom and human rights on the island.

On September 18, the US announced eased restrictions on business and travel with Cuba, the latest move by President Barack Obama to improve relations. 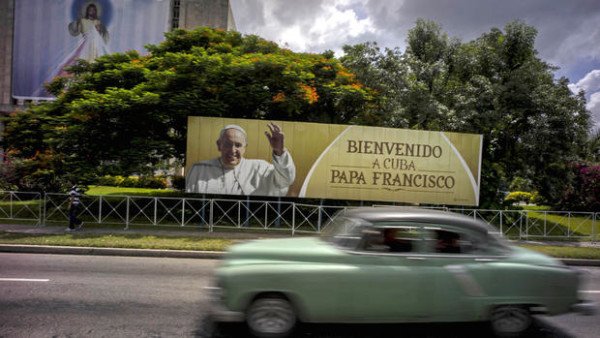 Argentina’s President Cristina Fernandez Kirchner also arrived in Cuba on September 19 and will attend a Mass to be celebrated by Pope Francis on Havana’s iconic Revolution Square.

Workers have been building a huge altar and stands for the congregation and choir on the square.

Ahead of Pope Francis’s visit, streets have been newly paved in Havana, and the cathedral has been renovated.

The airport terminal has also been renovated.

In the city of Holguin where Pope Francis will celebrate Mass on September 21, the cathedral has been repaired and repainted.

Officials say nearly 1,000 Cuban and foreign journalists are expected to cover the visit.

Pope Francis’s trip will also take him to the US for the first time as Pope.