Ahmed Mohamed, the 14-year-old Muslim student arrested in Texas for bringing a homemade clock to school, has continued to receive an outpouring of support from scientists, politicians and celebrities.

The Irving MacArthur High School student has been invited to visit Massachusetts Institute of Technology (MIT) by a professor who called him an “ideal student”.

Ahmed Mohamed also told ABC News he will accept an invitation to the White House.

The student’s arrest was sharply criticized and the charges against him were dropped.

Ahmed Mohamed hopes to one day attend MIT, one of the top engineering universities in the US. He told ABC he was more excited about the MIT tour than the White House invitation.

Some of the biggest names in the world of science have welcomed Ahmed Mohamed with open arms.

NASA, Google Science Fair, Space Camp USA and astronaut Chris Hadfield were among those applauding Ahmed Mohamed for his ingenuity. 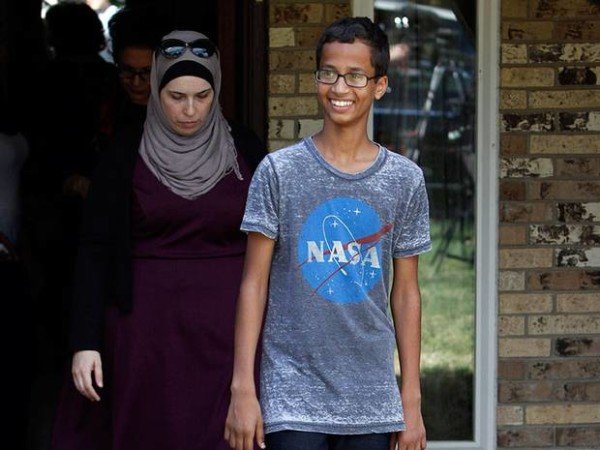 Officials at MacArthur High School alerted police because they thought the device Ahmed Mohamed built was a “hoax bomb”.

In a news conference on September 16, Ahmed Mohamed said he plans to transfer schools.

“I built a clock to impress my teacher but when I showed it to her she thought it was a threat to her. I’m very sad that she got the wrong impression of it.”

Ahmed Mohamed’s father, Mohamed Elhassan Mohamed, who is originally from Sudan, praised his son’s ingenuity, saying he fixes everything around the house, including his father’s phone and computer.

“He’s a very smart, brilliant boy and he said he just wanted to show himself to the world,” he said.

The police have rejected the claim made by Ahmed Mohamed’s family that he was detained because of his name.

“We have always had an outstanding relationship with the Muslim community,” Irving Police Department chief Larry Boyd said on September 16.

“Incidents like this present challenges. We want to learn how we can move forward and turn this into a positive,” Larry Boyd added.

Under the hashtag #IstandwithAhmed, thousands of Twitter users – including NASA scientists, Facebook CEO Mark Zuckerberg and President Barack Obama – praised Ahmed Mohamed’s initiative and questioned why he was detained.