Thousands of refugees pushed through the Croatian riot police lines in the town of Tovarnik at the Serbian border.

Refugees waiting for hours in blazing heat grew frustrated, though the situation is quieter now.

Croatia is struggling to deal with at least 7,300 arrivals since September 16 after Hungary closed its border with Serbia, blocking the previous route into the EU.

European Union leaders will hold an emergency summit next week to discuss the crisis. 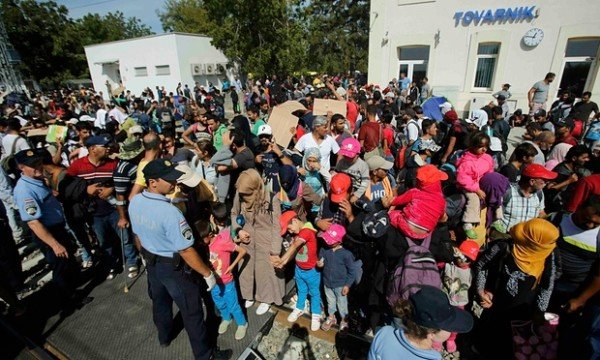 Croatian officials say refugees must apply for asylum there or be treated as illegal immigrants.

Authorities seem to be overwhelmed and surprised by the number of refugees – most of whom wish to travel on to other EU countries – and the Croatian interior minister has said the country is “absolutely full”.

Correspondents described the scenes in Tovarnik as mayhem, after several thousand refugees who had crossed from Serbia were held back by riot police, trying to get them to wait for transport on from the border.

Croatian police eventually gave way under pressure. Some of the refugees said they intended to walk to Slovenia.

Many are exhausted with supplies of food and water running low.

Croatia’s President Kolinda Grabar Kitarovic has asked the army to be ready to protect the country’s borders from “the illegal migration”, state news agency Hina reported.

Hungarian media reported that dozens of refugees were crossing from Croatia into Hungary at Illocska – thus avoiding the fence on Hungary’s border with Serbia.

Croatia said it would allow migrants to travel into northern Europe, but officials in Slovenia – which borders Croatia to the north – have said they would tighten their border security and would stick to rules which require asylum-seekers to register on arrival.

Slovenia, like Hungary, is an entry point to the Schengen zone, which normally allows people to travel between member countries without restrictions.

On September 16, hundreds of refugees were involved in clashes at the Hungary-Serbia border after Hungarian authorities used water cannon and tear gas to stop migrants forcing their way through.