In order to deal with an influx of refugees, more EU states have said they are imposing border checks.

Slovakia, Austria and the Netherlands said they would tighten controls, hours after Germany imposed checks on its border with Austria.

Hungary also completed a fence along its border with Serbia, and blocked a railway line used as a crossing point.

Luxembourg, which holds the EU presidency, said the decision was expected to be made law when ministers meet on October 8. 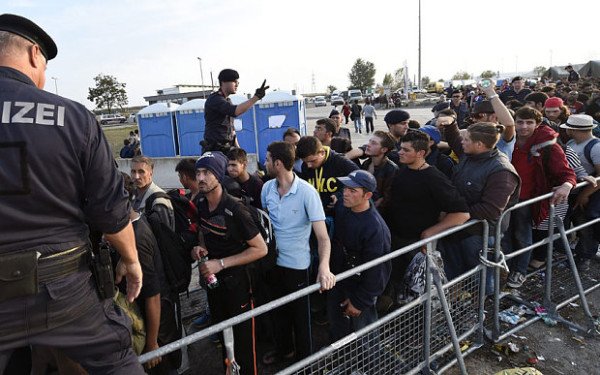 There were no details on how the asylum seekers would be shared out among EU states. Some countries have opposed plans for mandatory quotas.

European countries have been struggling to cope with a record influx of refugees, many aiming for Germany.

In Hungary, a container wagon, with one end covered in razor wire, was rolled along the track to plug the gap in the fence near the town of Roszke. Refugees were directed to an official registration point.

Hungary is due to enforce tougher measures from midnight, including arresting illegal immigrants.PM Viktor Orban told Hungary’s TV2 a state of emergency was “likely” to be introduced in the border area.

The new border checks further north are a challenge to the EU’s Schengen agreement on free movement, although the rules do allow for temporary controls in emergencies.

Chancellor Werner Faymann said troops were also being deployed, primarily to provide humanitarian help within Austria, but would be sent to the border if necessary.

Meanwhile the EU approved a plan for operation in the Mediterranean to conduct “search, seizure and diversion… of vessels suspected of being used for human smuggling”.

Most of the refugees who surged into Hungary in recent weeks fled conflict, oppression and poverty in Syria, Iraq, Afghanistan and Eritrea.

Many have been refusing to register in Greece or Hungary, fearing it will stop them being granted asylum in Germany or other EU countries.

On September 14, Germany’s new border controls were said to be causing traffic jams as long as 12 miles on highways in Austria.