More than 50 activists who took part in a march calling on the Cuban government to release political prisoners have been detained in Havana.

The arrests come less than a week before a visit to Cuba by Pope Francis.

Most of the activists were members of the predominantly Catholic dissident group, Ladies in White.

They walked through the streets of Havana holding up pictures of political prisoners, before they were rounded up by police.

According to Cuba’s main dissident website, 14yMedio, members of Ladies in White and activists from other opposition groups were handcuffed and pushed into police cars and buses on September 13. 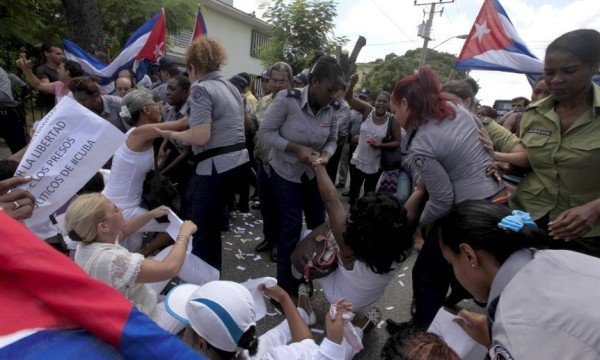 A number of them were released hours later, it said.

Cuba says the protesters are financed by right-wing American groups to destabilize the government.

Cuban dissidents are planning to protest during Pope Francis’ visit to Cuba, which begins on September 19.

They have accused the Cuban Catholic Church of becoming too cozy with the government of Raul Castro and failing to speak out against human rights abuses.

“The Church should be concerned about this or any time human rights are involved. It’s their duty,” said Jose Daniel Ferrer, head of leading dissident group Patriotic Union of Cuba.

Jose Daniel Ferrer told Reuters he was handcuffed and taken to a police station after Sunday’s protest.

Police later dropped him off at a bus terminal, he said.

The Cuban Catholic Church says it defends the respect of human rights but cannot take up individual political causes.

Pope Francis played a key role in facilitating the historic negotiations between Cuba and the US, which led to diplomatic relations being restored after more than five decades of hostilities.

Senior Cuban and American officials met in secrets for months at the Vatican before Presidents Barack Obama and Raul Castro surprised the world last December by announcing they had agreed to mend relations.