A British Airways plane has caught fire at McCarren International Airport in Las Vegas, forcing the evacuation of 172 people on board on emergency slides.

Airport officials said at least 13 people were taken to hospital with minor injuries.

The plane was seen engulfed in flames and smoke. The fire was later put out.

The pilot later told passengers that the accident was the result of a “catastrophic failure of the engine”, reports the Guardian‘s Jacob Steinberg, who was onboard the plane. 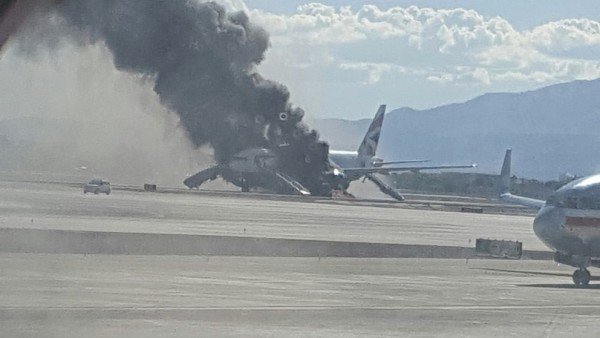 There were 159 passengers and 13 crew members on board.

It added: “@LASairport had the fire out and all passengers off BA flight by 4:18 PM – excellent work by our ARFF team.”

Airport officials said at least 13 people were taken to the city’s Sunrise hospital, most of them with injuries sustained while sliding down inflatable chutes during the evacuation.

Some of those on board said there was smoke in the cabin as one exit was opened and immediately declared unsafe.

An investigation into the blaze is now under way.

Officials later said one runway was shut down, but three others continued to operate.