Denmark has decided to suspend all trains to and from Germany after police stopped hundreds of refugees at the border.

Danish police also closed a highway between Denmark and Germany when some refugees began walking north after being forced off a train.

Refugees say their destination is Sweden.

As the EU struggles with a major migrant crisis, the European Commission has proposed that 120,000 additional asylum seekers should be shared out between members, using binding quotas.

Denmark’s DSB rail operator said trains to and from Germany had been suspended for an indefinite period because of exceptional passport checks.

Two trains carrying more than 200 refugees are being held in Rodby, a major port with ferry links to Germany. Danish police say many migrants are refusing to leave the trains because they do not want to be registered in Denmark. 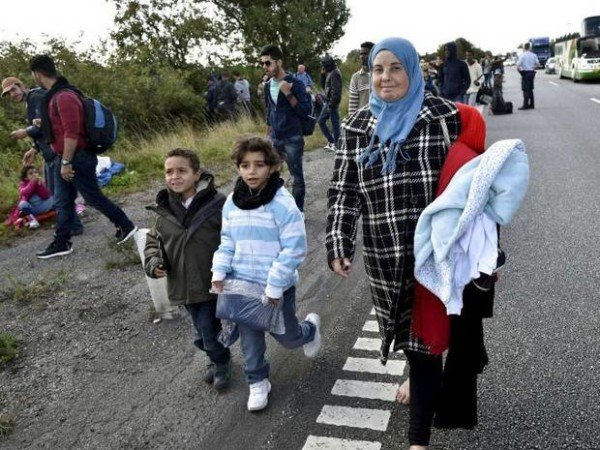 Sweden has become a top destination for refugees after it promised to issue residency papers to all Syrian asylum seekers.

Police also closed part of the E45 highway – the main road link between Germany and Denmark – after about 300 migrants left another train and set off on foot towards Sweden near the border town of Padborg.

More than 1,200 refugees have crossed into Denmark from Germany in recent days.

Germany and Denmark are part of the “Schengen group” of European states that allow passport-free travel – although under the scheme border controls can be re-imposed in exceptional circumstances.

Many of those escaping the civil war in Syria have traveled from Turkey across the sea to Greece, through Macedonia and Serbia, and then to Hungary from where they aim to reach northern Europe.

On September 9, European Commission President Jean-Claude Juncker announced plans for a “swift, determined and comprehensive” response through a quota system.

In a “state of the union” annual address, Jean-Claude Juncker said tackling the crisis was “a matter of humanity and human dignity”.

“It’s 160,000 refugees in total that Europeans have to take into their arms and I really hope that this time everyone will be on board,” he told the European Parliament.

The new plans would relocate 60% of those now in Italy, Greece and Hungary to Germany, France and Spain.

The numbers allocated to each country would depend on GDP, population, unemployment rate and asylum applications already processed.

Countries refusing to take in migrants could face financial penalties.

On September 9, Spain on said it would accept a quota of almost 15,000 extra refugees set by the EU.

However, Jean-Claude Juncker’s proposals was criticized by both the Czech Republic and Slovakia.

Czech PM Bohuslav Sobotka said compulsory quotas were “not a good solution”, while his Slovak counterpart called them “irrational”.

France welcomed the first of 1,000 migrants it has pledged to take from Germany, having committed to receive 24,000 migrants over two years.

Germany has welcomed Syrian refugees, waiving EU rules and saying it expects to deal with 800,000 asylum seekers this year alone – though not all will qualify as refugees and some will be sent back.