London’s FTSE 100 index was down by 2.6% in morning trade, while major markets in France and Germany lost nearly 3%.

Meanwhile, Asian shares were hit overnight, with the Shanghai Composite in China closing down 8.5%, its worst close since 2007.

The Chinese authorities tried in vain to reassure investors. 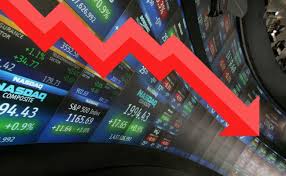 In addition, oil prices have plunged to six-year lows, as traders worry about slowing growth in the world’s second-largest economy.

Widespread investor fears about the sharp drops in Asia were exacerbated by thin trading volumes in Europe, with many investors away on holiday.

Investors might have to wait for several weeks for bargain hunters to come into the market to lift stocks.

Beijing’s latest intervention, to allow its main state pension fund to invest in the stock market, failed to calm traders’ fears, both in China and abroad.

Over the past week, the Shanghai index fell 12%, adding up to a 30% drop since the middle of June.

The sharp fall sparked a global sell-off, with the Dow Jones in the US losing 6%, while the FTSE 100 posted its biggest weekly loss this year, of 5%.

Earlier this month, the Chinese central bank devalued the yuan in an attempt to boost exports.