Thai police have cleared two men identified as suspects in the Bangkok bombing attack at the Erawan Shrine.

The two men, a Chinese tourist and his Thai guide, were filmed by security cameras standing near the prime suspect in August 17 blast at the Erawan Shrine, which killed 20 people.

A police spokesman said they were now satisfied the men were not involved.

The main suspect remains at large, but authorities said they believe he is still in Thailand.

Dozens of people were injured in Monday’s explosion, with some losing limbs. 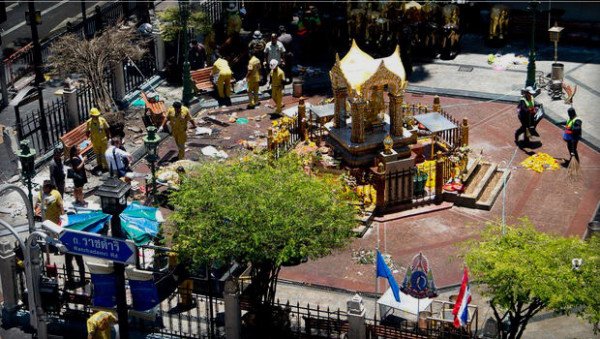 Police had said that at least 10 people were suspected of involvement in the attack, and that their prime target was foreign.

The two former suspects were captured standing in front of the main suspect as he left his backpack under a bench at the scene.

The footage led police to believe the pair may have been the attacker’s accomplices.

One of the men “met police and was released”, according to police spokesman Prawut Thavornsiri.

He told them he had taken the Chinese man to the Erawan shrine on behalf of a mutual friend.

Earlier reports suggested both of the men had presented themselves for questioning.

The Chinese national returned home a day after the bomb, Prawut Thavornsiri said.

Neither were “likely involved”, he added.

Earlier, Col. Winthai Suvaree, a spokesman for the ruling military junta, said the preliminary conclusion was that it was “unlikely” the attack was the work of an international terror group.

However, he later told Associated Press that a global terrorism link had not been ruled out, saying: “We still have to investigate in more detail.”

Police are also questioning a tuk-tuk taxi driver who drove the main suspect to the shrine, but are making slow progress in identifying the name and nationality of the man in yellow.

Twelve of the 20 dead in Monday’s attack were foreigners, including nationals from China, Hong Kong, the UK, Indonesia, Malaysia and Singapore.