Japan is marking 70 years since the end of World War Two with commemoration ceremonies across the country.

The Asian country has been criticized by South Korea and China, which accused it of failing to properly atone for its actions during the war.

Shinzo Abe had expressed “profound grief” on August 14 over Japan’s role in the war.

Speaking on August 15 at a ceremony in Seoul, Park Geun-hye called on Shinzo Abe to reiterate Japan’s apologies for abuses during its wartime occupations of neighboring countries. 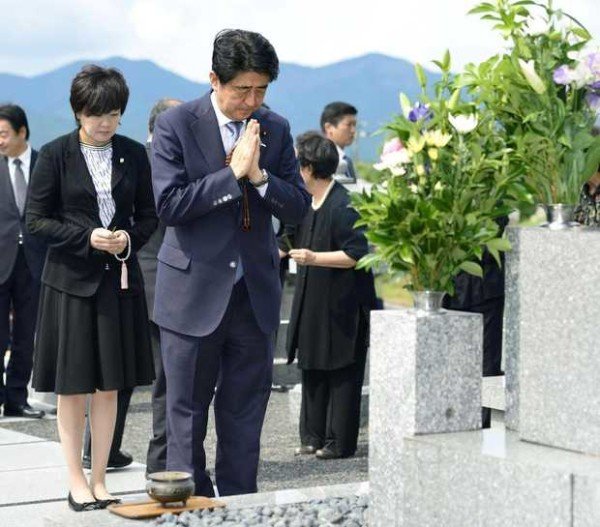 “History can never be covered up. History remains alive through its witnesses’ vivid testimony,” she said.

Japan’s surrender to the allies on August 15, 1945, freed the then-unified Korea from 35 years of occupation, leading Koreans to celebrate the date as Liberation Day.

President Park Geun-hye also called on Japan to resolve, “at the earliest possible date”, the issue of so-called “comfort women” – Asian women forced to work as s** slaves for the military during the war.

Shinzo Abe stopped short of issuing a fresh apology this year to victims of Japanese aggression, saying that future Japanese generations should not be “predestined to apologize” for their country’s wartime actions.

A spokeswoman for the Chinese foreign ministry said on August 15 that Japan should have made a “sincere apology to the people of victim countries … rather than being evasive on this major issue of principle”.

Speaking at the ceremony in Tokyo, PM Shinzo Abe said Japan’s war dead “sacrificed their life for the future and the prosperity of our homeland”.

“Their sacrifice was the foundation of today’s prosperity and we shall never forget their contribution. We always reflect the past and we hate the horror of the war,” he said.

Emperor Akihito also spoke at the ceremony in Tokyo, striking a more apologetic tone than Shinzo Abe with an expression of “deep remorse” for the nation’s wartime aggression.

Shinzo Abe did not visit Japan’s controversial Yasukuni war shrine this year, as he has in previous years, although there will be commemorations at the site.

Koichi Hagiuda, a member of parliament and aide to Shinzo Abe, visited the shrine with a cash offering on behalf of the prime minister.

“I paid respects to the souls of those who sacrificed their precious lives in the past war,” Koichi Hagiuda said.

The shrine has been criticized by China and South Korea because along with Japan’s war dead it honors leaders who were later convicted of war crimes.

As well as commemorations that seek to consign wartime atrocities to the past, there will be events that highlight ongoing tensions in the region.

Thousands of South Korean protesters are expected to hold an anti-Japanese rally on August 15. This past week a Korean protester set fire to himself outside the Japanese embassy in Seoul.

Meanwhile, in North Korea, clocks were set back 30 minutes on August 15 to so-called Pyongyang Time to remove the country from a shared time zone established under Japanese colonial rule.