Huge explosions have hit the city of Tianjin in northern China, reportedly injuring at least 300 people and causing at least seven deaths.

The blasts occurred when a shipment of explosives blew up in the port city at about 23:30 local time, the Chinese state media reports.

Pictures and video shared on social media showed flames lighting up the sky and damage to nearby buildings.

Shockwaves could apparently be felt several miles away from Tianjin. 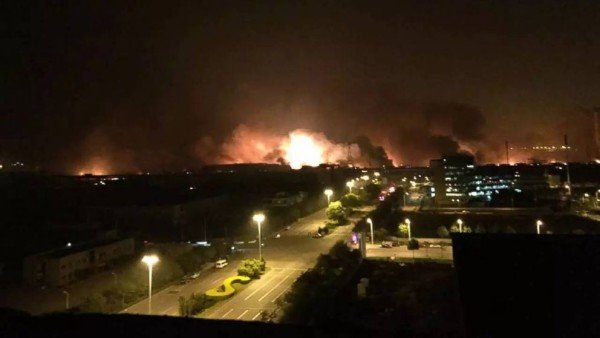 The first explosion was followed by another 30 seconds later.

An official Chinese seismic agency said the force of the first explosion was equivalent to three tons of TNT, the second was 21 tons.

China National Radio said cracks were visible in buildings near the site of the blast.

Several tower blocks near the port area are without power, reported the Chinese state broadcaster CCTV.

Tianjin, home to some 15 million people, is a major port and industrial area to the south-east of the Chinese capital, Beijing.