Rival rallies have been held in the Greek capital ahead of a crucial debt referendum on July 5.

PM Alexis Tsipras was greeted with huge cheers by tens of thousands of Greeks when he told supporters to vote “No” to the terms of an international bailout.

Those attending another huge rally nearby warned a “No” vote would see Greece ejected from the eurozone.

A Greek court earlier rejected a challenge to the legality of the referendum and it will go ahead.

Greece’s current bailout program ran out on June 30. All week banks have been shut, with limits imposed on cash withdrawals.

Another war of words flared late on July 3 when Finance Minister Yanis Varoufakis dismissed a Financial Times report that Greece was preparing contingency plans for a possible “bail-in” of bank deposits as a “malicious rumor”. The report quoted sources as saying banks were considering a “haircut” of 30% on deposits over €8,000. 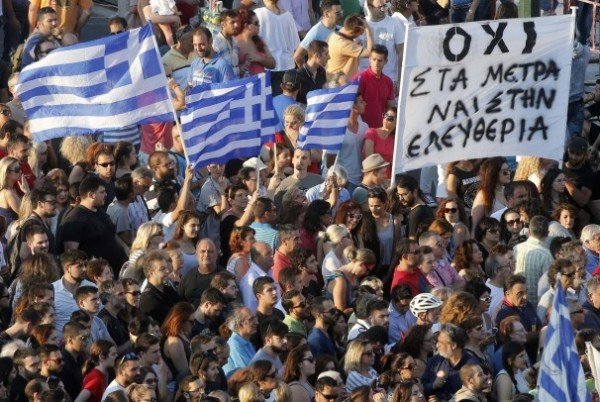 Opinion polls on July 3 suggested Greece was evenly split over the vote – an Ipsos survey putting “Yes” supporters at 44% and “No” at 43%.

Opinion polls within 24 hours of the voting are banned, as are more campaign rallies.

Estimates of the crowds gathered in Athens on July 3 ranged from 25,000 to 50,000, with police and observers agreeing that the crowds at the “No” rally were bigger.

Rallies for both camps were held in 10 other Greek cities.

In his speech, Alexis Tsipras reiterated the themes of almost daily addresses over the past week – the need for Greece to preserve its dignity and “say a proud <<No>> to [European] ultimatums” to sign up to fresh austerity.

The prime minister said: “This is not a protest. It is a celebration to overcome fear and blackmail.”

Alexis Tsipras urged Greeks to “decide to live in dignity in Europe”.

He denied a “Yes” vote would mean leaving Europe, saying: “We are not going to allow them to destroy Europe.”

Only a few hundred meters away, supporters of a “Yes” vote said they believed Alexis Tsipras could not deliver on such a promise.

Athens Mayor George Kaminis told supporters at the rally that people did not even understand the question on the ballot paper.

He said: “We have been dragged into a pointless referendum that is dividing the people and hurting the country.”

Claims by Greek politicians that a “No” vote will strengthen their hand in bailout negotiations have been rebuffed by European leaders.

Both EU Commission President Jean-Claude Juncker and Jeroen Dijsselbloem – head of the Eurogroup of finance ministers – have insisted a “No” vote will weaken the Greeks’ position and that even a “Yes” vote will not mean a deal is easy to agree.

Several European officials have complained in strong terms about Greece’s abrupt decision to hold a referendum on the terms of a bailout offer they say is no longer on the table.