Greece’s PM Alexis Tsipras has announced that the Greek banks are to remain closed and capital controls will be imposed.

Greece is due to make a €1.6 billion payment to the International Monetary Fund (IMF) on June 30 – the same day that its current bailout expires.

The country risks default and moving closer to a possible exit from the eurozone.

Greeks have been queuing to withdraw money from cash machines over the weekend, and the Bank of Greece said it was making “huge efforts” to keep the machines stocked.

Greek banks are expected to stay shut until July 7, two days after Greece’s planned referendum on the terms it had been offered by international creditors for receiving fresh bailout money.

The Athens stock exchange will also be closed on June 29. 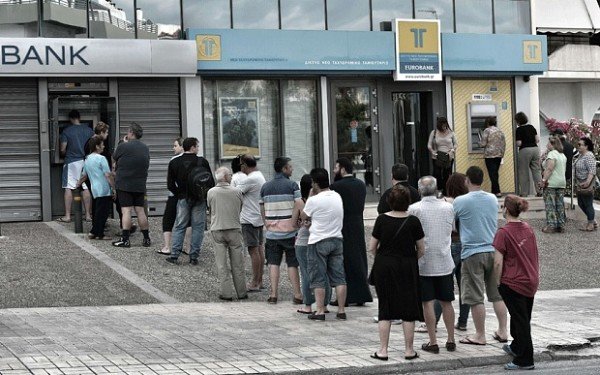 Eurozone finance ministers blamed Greece for breaking off the talks, and the European Commission took the unusual step on Sunday of publishing proposals by European creditors that it said were on the table at the time.

Greece described creditors’ terms as “not viable”, and asked for an extension of its current deal until after the vote was completed.

“[Rejection] of the Greek government’s request for a short extension of the program was an unprecedented act by European standards, questioning the right of a sovereign people to decide,” Alexis Tsipras on June 28 said in a televised address.

“This decision led the ECB today to limit the liquidity available to Greek banks and forced the Greek central bank to suggest a bank holiday and restrictions on bank withdrawals.”

Alexis Tsipras said he had sent a new request for an extension to the bailout.

“I am awaiting their immediate response to a fundamental request of democracy,” he said.

Following the news from Greece the euro fell by nearly two US cents against the dollar in early Asia Pacific trade, Reuters reported.

The announcement comes after a particularly turbulent few days for Greece.

The current ceiling for the ECB’s emergency funding – Emergency Liquidity Assistance (ELA) – is €89 billion. It is thought that virtually all that money has been disbursed.