NASA’s Dawn mission has gone into orbit around Ceres, the largest object in the Solar System between Mars and Jupiter.

A signal from the satellite confirming Dawn’s status was received by ground stations at 13:36 GMT.

Ceres is the first of the dwarf planets to be visited by a spacecraft.

Scientists hope to glean information from the object that can tell them about the Solar System’s beginnings, four and a half billion years ago.

Dawn has taken 7.5 years to reach its destination. Its arrival has seen it pass behind the dwarf to its “dark side”.

Over the next month, controllers will re-shape the orbit to get it ready to begin the prime science phase in late April.

Over time, the intention is to progressively lower the orbit until the probe is just a few hundred km above the surface. By that stage, it will be returning very high resolution pictures. 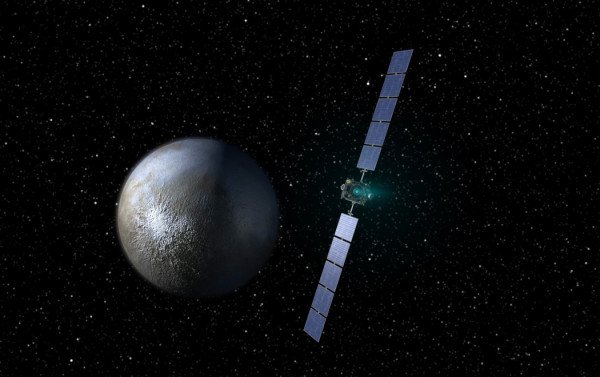 “We have much to do over the next year and a half, but we are now on station with ample reserves, and a robust plan to obtain our science objectives.”

The satellite has turned up at Ceres having previously visited asteroid Vesta.

Both objects reside in the belt of rocky debris that circles the Sun beyond Mars.

Researchers think Ceres’ interior is dominated by a rocky core topped by ice that is then insulated by rocky lag deposits at the surface.

A big question Dawn mission hopes to answer is whether there is a liquid ocean of water at depth. Some models suggest there could well be.

The evidence will probably be found in Ceres’ craters which have a muted look to them. That is, the soft interior of Ceres has undoubtedly had the effect of relaxing the craters’ original hard outline.

One big talking point has dominated the approach to the object: the origin and nature of two very bright spots seen inside a 92km-wide crater in the Northern Hemisphere.

The speculation is that Ceres has been struck by something, exposing deeply buried ices.

These will have vaporized on the airless world, perhaps leaving behind highly reflective salts.

The Dawn mission is expected to work at the dwarf planet for at least 14 months.

While Dawn takes the honor of being the first spacecraft to visit a dwarf planet, the next opportunity comes very quickly.

NASA’s New Horizons probe is due to make a close flyby of Pluto in July.

This far-more distant world was demoted from full planet to dwarf status at an international astronomy meeting in 2006.