Chicago Mayor Rahm Emanuel has been forced into a tough run-off election after failing to gain 50% of voters in his re-election bid.

Rahm Emanuel had 45% of the vote while his main challenger, Jesus “Chuy” Garcia, gained 34%.

Chuy Garcia was successful in garnering support from those who have been unhappy with Rahm Emanuel’s term as mayor, including the teacher’s union.

The run-off election will be held on April 7.

Speaking to supporters on February 24, Rahm Emanuel pledged to return to campaigning immediately.

“We will get back out there, talking to our friends and families and neighbours as they make a critical choice about who has the strength, who has the leadership, who has the ideas to move this great city forward,” he said. 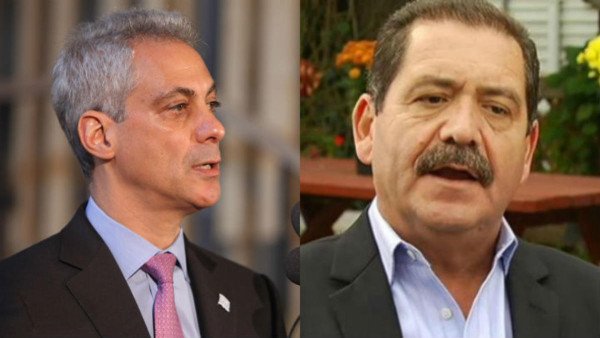 “Today, we the people have spoken,” Chuy Garcia told supporters, some who were already wearing campaign buttons with the run-off date and a cartoon version of Garcia’s moustache.

“This city deserves a mayor who will put people first, not big money, special interests,” Chuy Garcia said on Tuesday.

Both Chuy Garcia and Rahm Emanuel were already out shaking hands on February 25 at stations on the city’s L subway.

Rahm Emanuel needed 50% to avoid a run-off, and had fundraised extensively – $16 million, more than four times his challengers, over the course of the campaign.

President Barack Obama also endorsed Rahm Emanuel, who was his first chief of staff, for re-election.

Jesus Garcia, who was born in Mexico and raised in Chicago, is a county commissioner who jumped into the mayor’s race in October after another likely candidate, Chicago Teacher’s Union President Karen Lewis, was diagnosed with brain cancer.

During the campaign, Chuy Garcia and three other challengers criticized Rahm Emanuel’s push to close dozen of schools and his large fundraising operation.

Joyce Rodgers, who is retired, said she believed the school closures cost the mayor the trust of the city’s African-American community. Many in the city’s public schools are minorities.

Others were supportive of Rahm Emanuel’s efforts to bring more jobs to the city. The mayor campaigned on his record – making a series of tough budget decisions and raising Chicago’s minimum wage.