The Metro-North train involved in the rail accident which killed six people near New York City was within the speed limit for that section of track, investigators say.

The train crash happened after a mother-of-three stopped her car on a level crossing north of the city.

She was killed in the subsequent inferno along with five train passengers.

Accident investigators also said there were no problems with the signals or barrier at the site of the collision.

But they remain unaware why the driver, 49-year-old Ellen Brody, became stranded on the crossing at Valhalla, about 20 miles north of New York City.

An official from the National Transportation Safety Board, the federal agency leading the probe, said on February 5 that a witness in a nearby car had seen Ellen Brody stop on the crossing in the moments before the train approached. 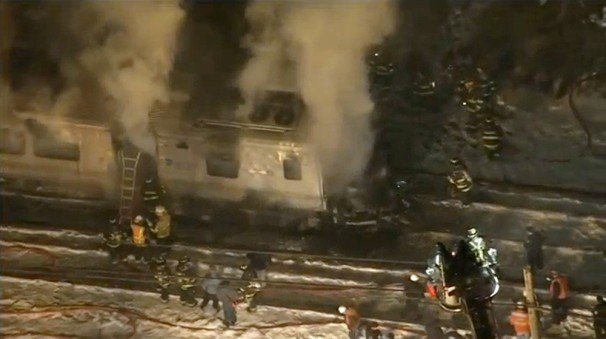 Investigator Robert Sumwalt said that the barrier was seen to come down on the rear of the car, a Jeep Cherokee, at which point Ellen Brody got out and appeared to inspect the damage.

He said that, according to both the witness and the train driver, after returning to the car she suddenly drove forward slightly – straight into the path of the oncoming train.

Data retrieved from the train’s recording device suggested it was travelling at 58mph an hour, added Robert Sumwalt – just below the 60mph speed limit for that section of track.

In addition to the six deaths there were 15 injuries, seven of them serious.

The electrified third rail of the track came through the front carriage of the train after the crash, setting it on fire.

Passengers had to escape from the rear carriages.

Metro-North, is the second-busiest rail system in the US, serving about 280,000 passengers a day in New York and Connecticut.

Last year, the National Transportation Safety Board issued rulings on five accidents that occurred on the network in 2013 and 2014, criticizing Metro-North while also finding conditions had improved.