Relatives, friends and fellow artists gathered at the First Cemetery of Athens to say their last goodbyes to famous Greek singer Demis Roussos who died early on Sunday, January 25.

Demis Roussos, who won global fame in the 1960s as a member of the popular group Aphrodite’s Child, died in an Athens hospital at the age of 68, after a long period of hospitalization.

The Egyptian born Greek singer had a successful international career and sold more than 60 million records around the world.

Demis Roussos, who has been mourned by fans across the world, scored a number one single with Forever and Ever. 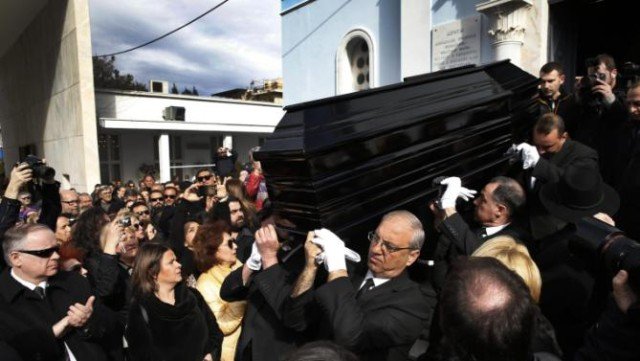 Famous Greek composer, Giorgos Hatzinasios, who was present at the funeral said: “Demis had a unique, unrivaled voice. He was a very happy man. I feel that Demis never grew up and kept hold of his childhood innocence.

“I can still hear his heartfelt laugh in my ears and I want to bid farewell to him with nostalgia and love.”

“His was a voice which awakened emotions in people and honored Greece wherever it reached. We bid farewell to Demis,” said Mariza Koch.

Demis Roussos put his international success down to the advent of cheap air travel opening up Europe to regular holidaymakers.