Addressing his first cabinet meeting, Greece’s new Prime Minister Alexis Tsipras says his country will not default on its debts.

Alexis Tsipras said he would negotiate with creditors over the €240 billion ($270 billion) bailout.

“We won’t get into a mutually destructive clash but we will not continue a policy of subjection,” said the left-wing Syriza party leader.

Germany’s vice-chancellor, Sigmar Gabriel, said it was unfair of Greece to expect other states to pick up its bills.

As Alex Tsipras made his debut cabinet speech, Greek government bond yields rose to their highest since the 2012 debt restructuring, amid investor concern that the anti-austerity coalition was gearing up for a clash with international creditors.

The Athens Stock Exchange fell by 8% in response to Alexis Tsipras’s remarks, and as it emerged that his government was putting on hold major privatization projects, including the port of Piraeus and the main power company, the Public Power Corporation of Greece. 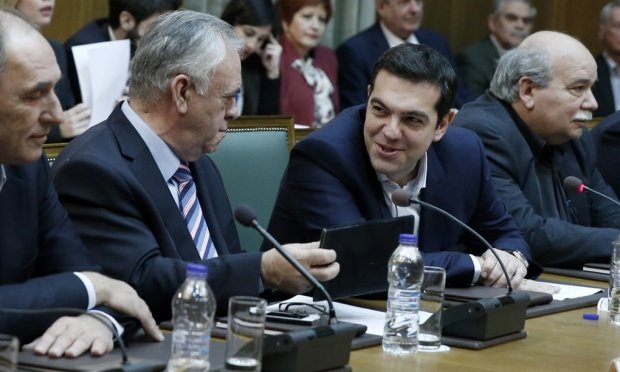 The country’s economy has shrunk drastically since the 2008 global financial crisis, and high unemployment has thrown many Greeks into poverty.

Vowing to defend Greek dignity, Alexis Tsipras said a renegotiation of the Greek debts would aim for a “viable, fair, mutually beneficial solution”. He did not give any details.

Alexis Tsipras promised “realistic proposals” for an economic recovery and vowed to fight corruption and tax evasion. His recovery plan, he said, was aimed at preventing deficits in the future.

The new coalition government – with the right-wing but equally anti-austerity Greek Independents – was sworn into office on January 27.

Its chief economics spokesman, Euclid Tsakalotos, has argued that it is unrealistic to expect Greece to repay its huge debt in full.

The current bailout program of loans to Greece ends on February 28. There are still 1.8 billion euros of loans that could be disbursed to Greece if it meets the conditions imposed by the troika.

Economists estimate that Greece needs to raise about 4.3 billion euros in Q1 2015 to help pay its way, with Athens possibly having to ask the IMF and eurozone countries.

Sigmar Gabriel, who is also economy minister and leads the junior partner in Angela Merkel’s coalition government, said: “Our aim must be to keep Greece in the eurozone but solidarity and fairness work both ways.”

“Citizens of other euro states have a right to see that the deals linked to their acts of solidarity are upheld,” he said.

“Every country in Europe has its own history and cannot separate itself from this through new elections.”

Sigmar Gabriel urged the Greek government to talk to its partners before going ahead with decisions such as halting the privatization of the port of Piraeus.

“Things that Greece itself won’t do cannot be shunted on to the taxpayers and employers in neighboring states,” the German Social Democrat leader said.

Greek 10-year bond yields climbed above 10%, reflecting fears that investors may not get their money back.

The yield of a bond is inverse to its price: as the price goes down, the yield grows.