NYC and other Northeast areas have shut down, with forecasters warning residents to expect “crippling” amounts of snow.

According to forecasters, Winter Storm Juno could dump up to 30ins in some parts of New Jersey, Maine and New Hampshire.

All non-emergency vehicles were banned in New York City from 23:00 on January 26 and subway services were suspended. Similar measures were in place in Boston, Massachusetts.

Some 60 million people may be affected.

An emergency has been declared in the states of New York, New Jersey, Connecticut, Rhode Island, Massachusetts and New Hampshire.

Boston, which is forecast to receive some of the highest snowfalls, has also suspended public transport and car travel. 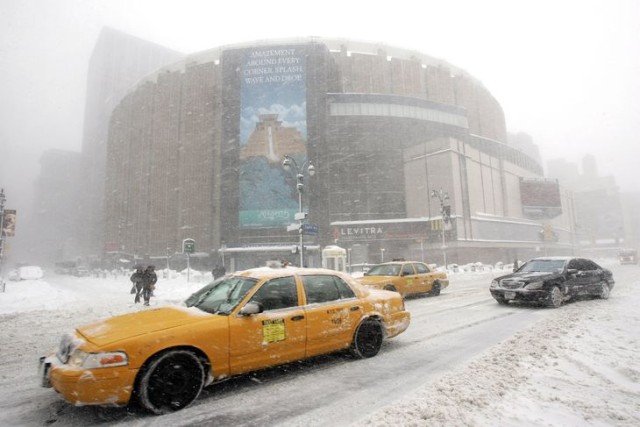 However, some meteorologists in Pennsylvania and New Jersey have downgraded their snowfall predictions, saying there has been less snowfall than initially forecast.

At least one winter storm warning in New Jersey has been canceled.

6,500 flights in and out of airports along the East Coast were cancelled and businesses and schools closed early on Monday, January 26.

Schools not expected to reopen before Wednesday, January 28, at the earliest.

Boston is expected to bear the brunt of the storm as the National Weather Service (NWS) warned that a “potentially historic blizzard” was approaching the north-east.

“If you are in your car and you are on any road, town, village, city, it doesn’t matter, after 11 o’clock, you will technically be committing a crime.

“It could be a matter of life and death so caution is required,” the governor said.

Echoing his words, NYC Mayor Bill de Blasio urged residents to stay out of the way of the 2,300 snowploughs clearing city streets.

“You can’t underestimate this storm. What you are going to see in a few hours in something that is going to hit very hard and very fast.”

Similar bans for non-emergency vehicles were enacted in Connecticut and Massachusetts.